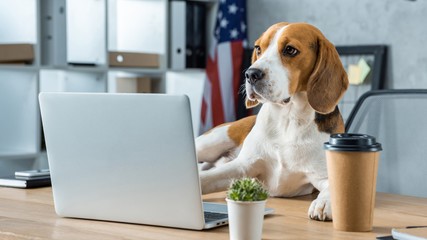 Coffee lovers the world over likely greeted the findings of a new study showing a second and even third cup of coffee could be good for your heart with a sigh of relief, but the same chief ingredient that is a mood lifter for humans can be extremely harmful for your pet.

That’s the warning from the Washington, D.C.-based Pet Food Institute (PFI) which has been promoting pet health in the U.S. for more than half a century and in the Caribbean for nearly a decade.

“Chocolate, coffee and caffeinated beverages contain methylxanthines, substances which are found in cacao seeds,” explains Nat Davies, Senior Director of Business Operations and Programs with the Pet Food Institute (PFI). “Methylxanthines can cause vomiting and diarrhea, panting, hyperactivity, abnormal heart rhythm, tremors and seizures. The toxicity varies depending on the type of chocolate, the size of the pet, and the amount they ingested. It’s best to keep all chocolate and caffeinated beverages away from pets.”

A single 8-ounce cup of coffee can contain as much as 95 milligrams of caffeine and what’s more surprising, say experts, is that despite its name, even decaf coffee contains traces of caffeine, though nowhere near what a regular cup of brewed coffee or espresso would have. Especially dangerous for pets are those super energy drinks – that big burst they give you could actually be deadly for the dog who is like part of the family. PFI urges pet owners and caregivers to steer clear of anything with caffeine, including chocolate, tea, certain supplements and some berry drinks.

For the rest of us who worried as we brewed that extra cup of coffee in the morning, the findings of the study out of Australia are a welcome nod to a little more Joe to ensure our get up and go has not gotten up and gone.

What sets the new study from the Alfred Hospital and Baker Heart Institute in Melbourne apart from previous reports is that it reports not only is coffee safe, but that second or even third cup could actually be beneficial for people that suffer from heart disease.

“Because coffee can quicken heart rate, some people worry that drinking it could trigger or worsen certain heart issues. This is where general medical advice to stop drinking coffee may come from. But our data suggest that daily coffee intake shouldn’t be discouraged, but rather included as a part of a healthy diet for people with and without heart disease,” says Peter M. Kistler, head of arrhythmia research at the institute.

The study was reported by the American College of Cardiology.

Educating the public about pet health care is a priority of PFI. Last year, PFI representatives conducted information sessions via zoom with more than 1,600 students in The Bahamas and Jamaica and sessions are being scheduled with Turks and Caicos and Trinidad & Tobago in the coming weeks.