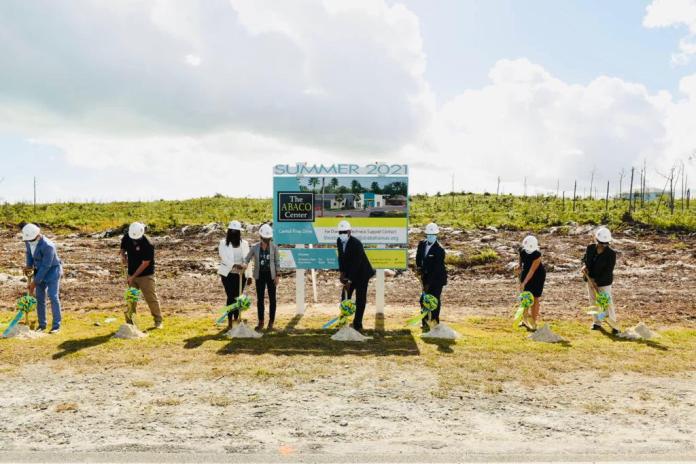 CENTRAL PINES, Abaco, The Bahamas – Prime Minister and Minister of Finance the Most Hon. Dr. Hubert Minnis, and Minister of Foreign Affairs and Member of Parliament for North Abaco the Hon. Darren Henfield were among those who took part in the groundbreaking ceremony for the Central Abaco Community Centre/Hurricane Shelter, December 14, 2020.

The project is expected to cost approximately $1.8 million and should be completed in May 2021 before the next hurricane season begins in June. The public-private partnership is between the Bahamas Reconstruction Authority, Ernst & Young, Sol Relief and Bahamas Hope Foundation.

The Prime Minister, just before beginning his official address, acknowledged travelling to several islands in the country and said because residents are adhering to the protocols in place, The Bahamas will win the war again the pandemic. Prime Minister Minnis said the hard work continues in the rebuilding of Abaco, and the ceremony was another project to this end.

“This facility will serve as a high-performance community center and storm shelter in Central Pines Abaco.”

It is expected the facility will serve the communities of Greater Abaco for meetings, conferences, seminars, religious functions, and other cultural events.

“During a hurricane or any disaster, the Abaco Center will convert into a shelter that can accommodate 800 people.”

It is anticipated, he continued, that other shelters will be built in Abaco and Grand Bahama. Since the passing of Hurricane Dorian in September last year, the government spent $6 million repairing churches and schools in the Northern Bahamas.

He said, “We are in discussion with World Food Kitchen and other partners to provide technical assistance for the center, which will also act as a logistical and food distribution center.”

Local licensed architects, engineers and general contractors will be used, and the local workforce will be employed. The design of the building, which is in accordance with the Bahamas Building Code, incorporates traditional elements and colors from local architecture and will be able to withstand 180 miles per hour winds.

It will include a multipurpose space, kitchen, full bathrooms, meeting rooms and offices with hurricane impact doors and windows. The facility will have the capacity to store hurricane supplies and provisions, along with chairs, tables and other furnishings for community use and events.

The Center includes water saving technology with backup storage to maintain operations for at least five days in the event of damage to the water supply infrastructure. The building is designed with optimal thermal performance properties including solar driven air-conditioning solutions.

The building will also host: • after school programming, • a multi-purpose community and cultural center, • community events, • four offices that will cross function as a command control room, • a first aid room, • and an administration area and meeting rooms.

The building will include state of the art playgrounds, a full-size basketball court, shaded gazebos, dining tables, and a one-of-a-kind eco-community botanical garden.

The Prime Minister then explained that while being referred to as The Abaco Center during its construction phase, there will be a naming competition in January for the schools on the island. The winner will receive $10,000 to be used by that school. This donation, he explained, has been given by a Bahamian businessman.

“Let me close by thanking all of those involved in the planning for this new Center, which will be a model for such multipurpose facilities throughout the country. This includes the various donors and government officials who continue to work to rebuild your communities after Hurricane Dorian.

“I know that this has been and continues to be a very difficult time for Abaco. But things are improving because of the hard work, the resilience, the hope and the faithfulness of all of you and the people of Abaco.

“Let us continue to rebuild Abaco, with faith in one another and faith in Almighty God.”

Prime Minister Minnis then extended Season’s Greetings to all those on the island. Also present during the ground breaking ceremony were: Managing Director of the Disaster Reconstruction Authority, Katherine (Kay) Forbes-Smith, who served as MC for the occasion; James Albury, Member of Parliament for Central and South Abaco; Pastor Edgburt Tinker, President, Abaco Christian Council; Pastor Silbert Mills, along with other members of the Board of the Disaster Reconstruction Authority and their staff from Grand Bahama and Abaco; as well as representatives from Sol Relief and Ernst & Young. Rolner Paul, a student of Patrick J. Bethel High School, sang the National Anthem.