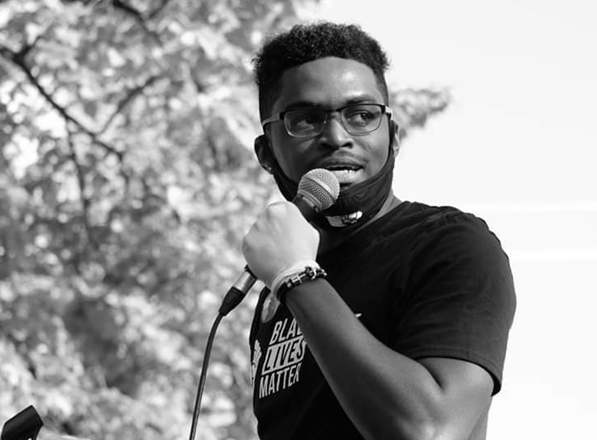 Dante Bazard Jr’s confirmation this month to the Prince Edward Island Human Rights Commission is not only a first for a Bahamian, but for black people in the province.

At 27, he is the youngest appointee named by the Legislative Assembly of the Canadian province. He will serve a term of three years.

Commissioners are selected for their in-depth knowledge and expertise in human rights issues as well as matters relating to vulnerable populations, public policy, social values, and concepts of fairness, justice, and public service.

“My goals are to increase representation for the Black, Indigenous, and People of Colour (BIPOC) communities in all areas of governance and make a difference in this position,” he said.

“As a black male I am well aware of the experiences and struggles of marginalized communities and hope to aid in the fight for justice.”

“We are proud of Dante’s accomplishments and know that he will make a meaningful impact for BIPOC in PEI and bring honour to his country at the same time,” said his parents.

In his new role he will help to enforce Prince Edward Island’s Human Rights Act. The commission settles disputes through mediation. If warranted, it investigates to determine the merit of the allegation. The commission also has the power to hold public hearings to establish the veracity of discrimination complaints.

“Dante is so brilliant and he’s going places. P.E.I needs Dante to be a greater province,” said Gordon McNeilly, chairman of the committee responsible for the appointment in an interview with Canadian newspaper, The Guardian.

Mr Bazard is a 2016 graduate of the University of Prince Edward Island (UPEI) where he obtained his Bachelor of Arts in psychology.

Initially, his plan was to become a psychologist. Taking Dr Colleen MacQuarrie’s “Social Justice and  Psychology” class his junior year changed his mind.

“Dr MacQuarrie became my mentor. She introduced me to the research aspect and the work of anti-racism, fighting oppression, identifying biases and white privilege. It paved the way for my entry into human rights advocacy.”

Ironically, it was in The Bahamas where Mr Bazard said he first experienced racial profiling.

In tenth grade, Bazard and his family moved to Paradise Island. During his time in high school, he was frequently stopped by P.I. police while walking home with his younger brother and cousin.

“When you’re in a majority black neighborhood in The Bahamas you’re fine,” he said. “I didn’t know at the time what was happening because I wasn’t able to identify it, but we had to prove that we lived there. We had to point out our home.”

He did not connect the harassment to race until later, as a college student in Canada.

“Racism and oppression came when I went away to college. It was covert and overt. It was the first time I was called the N-word aggressively. It stemmed not only from being black but also from being from a small country. The experience fueled my passion to go into human rights.”

In his third year at UPEI, Mr Bazard formed the school’s first Caribbean Society to bolster black representation on campus and create a sense of community for students who hailed from the region.

Following graduation, he went on to obtain a Master of Science in clinical criminology from the University of Leicester in the United Kingdom (UK).

After the brutal murder of George Floyd, Mr Bazard helped organize a Black Lives Movement March along with the black culture society and BIPOC USHR. With over 10,000 persons in attendance, it was the largest gathering in PEI history. At the event, Mr Bazard gave a speech entitled, “Take action”.

His work with the former involves anti-oppression training, community engagement, and policy advising. The latter centers around college students’ professional development and helping bridge the gap between tertiary education and employment, particularly for international students.

Along with his passion for human rights and social justice, Mr Bazard is an accomplished researcher who is working on various academic publications with UPEI. One area of research analyzes police discourse when officers investigate sexual and physically violent crimes. Another study area is youth development and recovery post COVID-19.

Earlier this year, he executed a nine-month stint as a child and youth social service worker at Hillsborough Hospital in Charlottetown, Canada. He has also worked as a behavioral therapist at Capital Family Services in Fredericton, Canada.

Said Mr Bazard: “Black pioneers before me made it possible so that I can break down barriers and occupy positions of power. I hope to do the same for the future generations.”