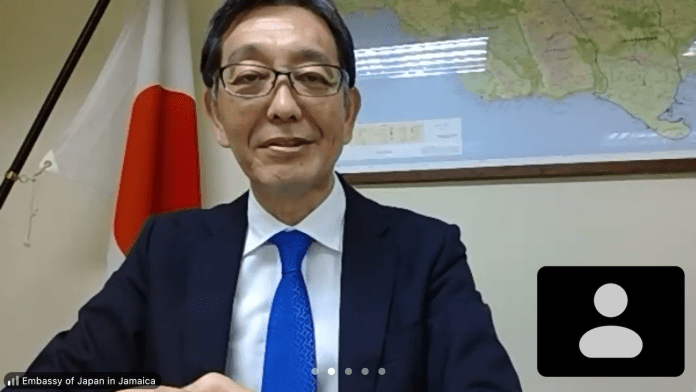 The Minister of Foreign Affairs, the Hon. Frederick A. Mitchell, MP, met virtually with His Excellency FUJIWARA Masaya, Ambassador-Designate of Japan, and received his Copie d’Usage on 2nd November 20221. Director-General Sharon Brennen-Haylock was also in attendance.

Following the brief presentation ceremony Minister Mitchell and Ambassador-Designate Fujiwara discussed a broad range of topics including the CARICOM-Japan Summit mechanism; COVID-19 matters; COP26, where both the PM of The Bahamas and the PM of Japan were presently in attendance; Climate Change and Adaptation; and candidacies for upcoming elections in international organisations, particularly
those of The Bahamas and Japan to the International Maritime Organization.

Also mentioned were the preparations for the involvement of the international community at the World Expo to be held in Osaka, Japan, in 2025.

During the discussion, Minister Mitchell expressed the gratitude of The Bahamas to Japan for their continued assistance following natural disasters. He mentioned that he had travelled to Japan several times and that the Honorary Consul-General of The Bahamas to Japan, Mr Robert (Sandy) Sands, was an excellent representative for Japan in The Bahamas. Minister Mitchell stated that The Bahamas is considering
reciprocating such an office in Tokyo and will be designating a non-resident Ambassador to Japan shortly.

Minister Mitchell extended congratulations to Japan on their elections over the past weekend, as well as for their excellent job in hosting the Olympics, especially during such challenging times. Both sides noted in conclusion the strong friendship between the two countries.