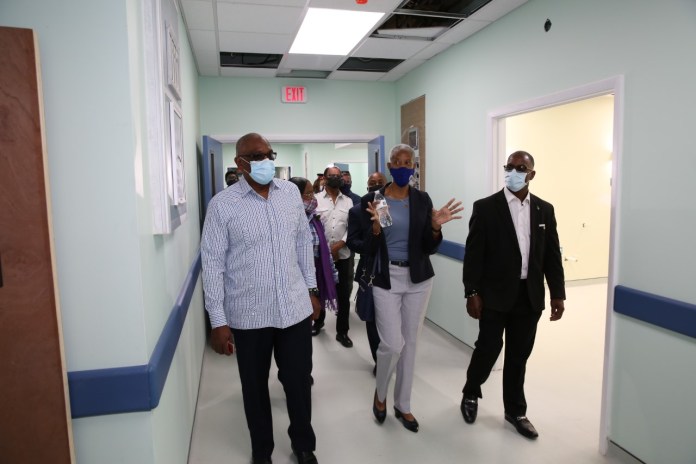 Prime Minister the Most Hon. Dr. Hubert Minnis spent the morning on Friday touring various medical facilities in Grand!Bahama. The first stop was the Rand Memorial Hospital, where he was met by Managing Director of the Public Hospitals Authority Catherine Weech, and Rand Administrator Sharon Williams. Ms. Weech explained that there are two phases that have deadlines of April 12 for section A and April 19 for section B.

“The first part of the hospital QQ basically the main Foyer area, Pediatrics, Pharmacy and Registration along with the area encompassing the Chapel and the Healing Garden QQ that is all a part of phase 1 and they have until Monday to have the work completely finished.”

The medical section will be completed by April 19 and the staff will then be able to clean and install the furniture and equipment and be ready to open on April 23.

Prime Minister Minnis asked if all vendors have been notified, and Ms. Weech said they have, which is why it is important to have everything finished by the end of the month. At the Commissioning on Friday, April 23, she said they would like to have the
Infectious Disease area commissioned as well as the new Kitchen and Cafeteria, which have not been formally commissioned even though they are in use.

Following the tour of the hospital, the Prime Minister then toured the Susan J. Wallace Centre where residents are being vaccinated, the construction site of the Western Atlantic School of Medicine, and the High Rock Clinic. Accompanying the Prime Minister on his tour were: Minister of Youth, Sports and Culture, the Hon. Iram Lewis; Minister of State for Finance and for Grand Bahama, Sen. the Hon. J. Kwasi Thompson; Hospital Administrator, Sharon Williams and Permanent Secretary in the Office of the Prime Minister, Harcourt Brown.