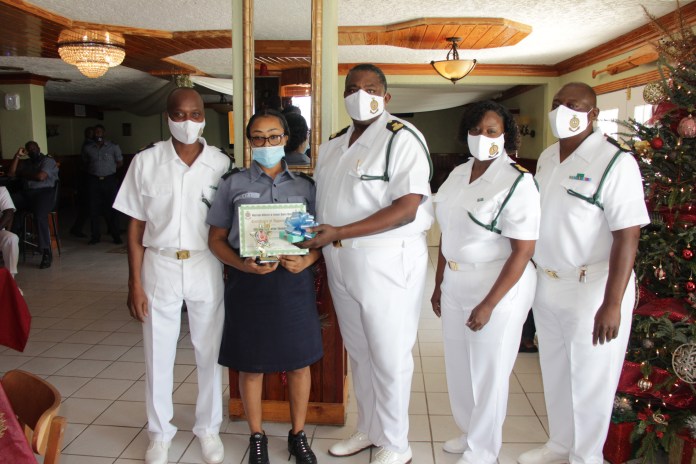 In recognizing and rewarding the efforts of excellence in the workplace while developing a professional and high-performance workforce consistent with the Commander Defence Force, Commodore Raymond King’s strategic intent, members of the Warrant Officers and Senior Rates (WOSR) Mess recently received tokens of appreciation for their services. President of the WOSR Mess, Chief Petty Officer Antoine Adams, along with his committee members, presented gifts and certificates to the staff on December 23, 2020, as a show of gratitude for their valuable contributions during the past year.

As a show of appreciation for his services, Chief Petty Officer Adams was also presented with a keepsake from the WOSR Committee. Having served as Mess President for the past two years, he has made tremendous strides in efficiency as a
leader. The Mess committee and members thanked him for his awesome leadership.

As the Royal Bahamas Defence Force continues to guard the territorial integrity of the Commonwealth of The Bahamas the organization says ‘Bravo Zulu’ to all Officers and Marines who serve with honor.