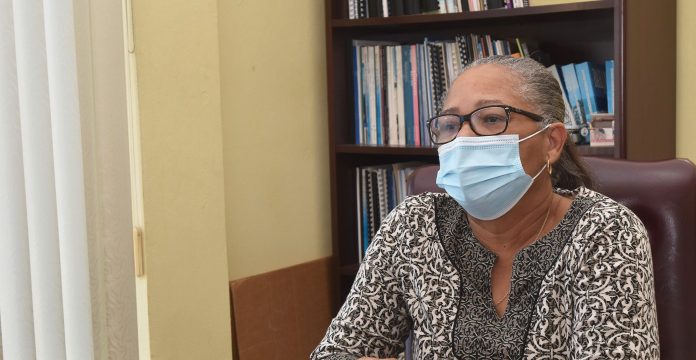 As students sit the 2021 national examinations, Evelyn Sawyer, Assistant Director, Education, Examination and Assessment Division, reflects on the 2020 examinations and recognizes the successful achievements of public and private school students, their teachers and parents.

“When we consider the resilience of the children, those who actually turned up to write the exam, they can only be better for it. They put whatever behind and moved on. That group of students is going to make it,” said Mrs. Sawyer. “The parents who insisted that their children write the exams, it’s a testimony to them too. There were some teachers who went over and beyond; they enforced the coursework — some really had a vested interest in the children.”

In 2020, to curb the spread of COVID-19 in the country, the Ministry of Education (MOE) temporarily suspended national examinations leaving a period of uncertainty over whether national examinations would resume. With marking centres shutting down because of exposure to COVID-19, fears associated with the infectious disease, anxiety and discouragement, Mrs. Sawyer described this period as “very challenging.” She opined that the decision to administer the exam was the best decision that could have been made.

“This was hard fought. There was back and forth. We had to try to proceed with the administration of the exams. If we failed in our trying at least we were satisfied that we tried. The mere fact that we were able to administer the exam and get through despite COVID-19 itself was a major accomplishment.

“We believed the children deserved to have an opportunity. At the end of the day we wanted to know that we did what we could for the children.” Mrs. Sawyer recounted that the students experienced their own stress. “Imagine that you spend 12 years in school and you don’t know what’s going to happen.

Depending on where they were, the children bought into what was fed to them. For example, the student from Queen’s College [Kamori Sawyer] who got 13 As, she had to have somebody behind her, pushing and saying you could do this.

“Some parents were afraid of [exposure] to the pandemic. Some said their child was in the University of The Bahamas (UB). UB allowed students time off to write the exam but some of them said because their child had already been accepted in UB they did not need to bother. I encouraged parents to write the exam. The child may not have needed it then but may need it later,” she said.

Mrs. Saywer informed that in comparison to 2019, the turnout for the percentage of persons who took the BJC exam, was 85 per cent better in 2020. With regard to the BGCSE, she said only half of the children who were registered showed up for the exams.
“It’s unfortunate that a lot of them chose not to write it but we applaud those who did and some did extremely well like the child who got 15 BGCSE subjects with grades from A to C.

“For 2020, this year and maybe another year or so we have a group of individuals who through no fault of their own, were shortchanged. “I think a lot of children have regrets or their parents have regrets that their children did not do the exams last year. The BGCSE is a level playing field. I don’t mind what degree you get, when you go for a job, they ask for BGCSE results. I think a lot of children did not realize that they will still ask for them,” she said.

Mrs. Saywer noted that NGM Major in Long Island, is among the schools that have consistently done well in national exams and 2020 was no different.

“It has a small school environment and population and is on an island where education is still very important. A lot of persons from Long Island have done extremely well in education and otherwise over the years,” she said.

Abaco
Mrs. Sawyer said with Abaco on the rebound after Hurricane Dorian, only students representing Patrick J. Bethel High School, SC Boodle High School and Moore’s Island All Age School sat national exams in 2020. “A lot of them [students] were displaced. A lot of them who were registered, for example students from St. Francis De Sales Catholic School, were transferred to Aquinas College [in Nassau]. They registered under Aquinas College but went back to Abaco to take their exams.

“We had to make arrangements to accommodate them. Dominique Russell, the District Superintendent there, did a phenomenal job to make sure the students were accommodated.

“Students from other schools who were stuck in other Family Islands had to be accommodated. They returned to whatever island they were from or have relatives in. We had to ensure that all of the special circumstances were accommodated,” added Mrs. Sawyer.

For 2021, only Smith’s Memorial Academy, Long Bay School and Agape Christian School have come back on stream with national exams. “It’s very encouraging that they have returned.” Mrs. Sawyer underscored that the success of the 2020 National Examinations could not have been achieved without the extraordinary strength of character of the students who opted to take the examinations. She assured that the MOE celebrates the achievements of the students who did their best under extremely daunting circumstances.

“We celebrate your spirit and the spirit of the people who were behind you, school administrators, teachers, parents, other relatives and community leaders; yes, behind you and beside you and in front of you, encouraging you,” said Mrs. Sawyer.

Criteria: The student receiving the best results on the island: At least 4 subjects at ‘D’ and above.

BJCs Best by Island
Criteria: The student receiving the best results on the island: At least 4 subjects at ‘D’ and above