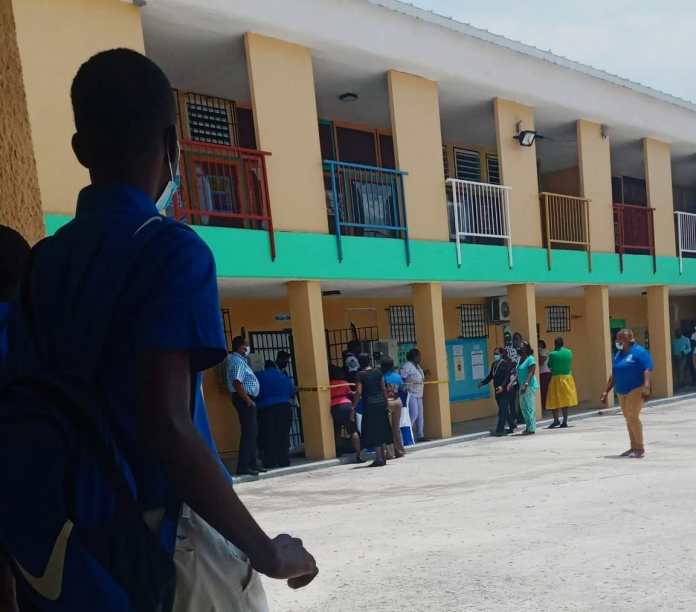 A tragic end to what was supposed to be a normal day at school for government high students. Parents of students waited outside the gate waiting on their kids who were locked on the inside of the GHS campus after a daytime stabbing left a teenage male dead and another fighting for his life in hospital.

Two students were in the corridor having a conversation with one another when they were approached by two others who started an altercation. An edged tool was produced and two of those persons were stabbed.

Police say the high school perpetrators then scaled the school walls before making good their escape.

Inside, pandemonium, as scared and anxious teens phoned home to parents. Many parents showed up at the school’s gates with impassioned attempts to make sure their children were safe.

“That’s not right, it’s not right for a mother for to have to find this thing out just like this and nothing.

“Nobody saying nothing, even after have to find out on the news – a stabbing, a death at that” a parent said.

The tragedy prompting calls from frustrated parents for more police presence in schools.

Minister of Education the Hon. Jeffrey Lloyd noting that while the situation is grave, incidents of this kind are a one-off occurrence.

“Our schools are very safe, it is a mantra and a mandate of us here at this ministry to ensure the safety of our schools for our students, our teachers, our administrators and staff who had already come on.

“Obviously, this is very unfortunate, but I wish parents and the Bahamian people to know that our schools are very safe” he said.

And while hundreds of parents are relieved, one family grieves as the search begins now for the two students responsible for this fatal crime. Police Press Liaison Officer Supt. Audley Peters says that investigations are ongoing.

“Our officers would have left the schools, and the leads that they would’ve had; we are following the leads at this time and I believe in due course, we would have those persons in custody” Peters said.