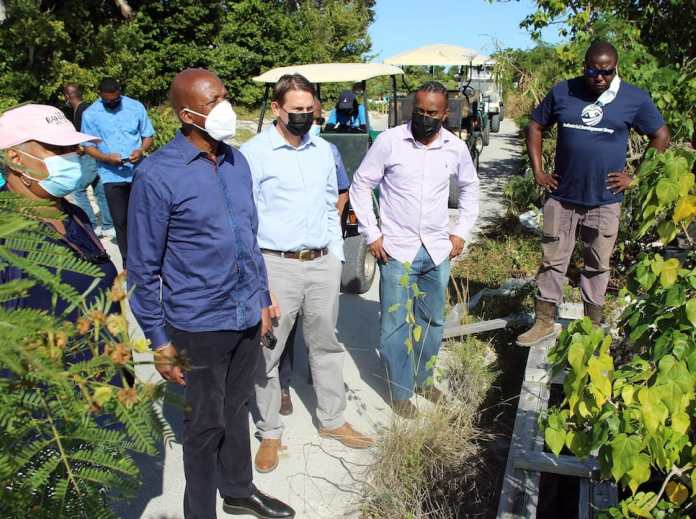 ABACO, The Bahamas – The Minister of Works and Utilities is leading a “reconnaissance” tour of Abaco and its cays.
“We will view the physical infrastructural work to be done, road projects underway, look at schools in the community,” said Minister Alfred Sears. “We will be looking at the progress of the bridge in Little Abaco and to see what can be done to expedite that project. We will be paying attention to the docks; the docks are critical because it is the lifeblood of all of our communities. “We will be going to some of the cays in the Abacos so we can ascertain work that has been done. As you know some of the work has been done by NGOs and we
are grateful for [it].”

Docks will also be given priority during the three-day visit to the northern island. Minister Sears was accompanied by Melanie Roach, Director; Robert Mouzas, Deputy Director; Ted Johnson, Acting Head Architect; David Cox, Senior Civil Engineer. Parliamentary Secretaries Kirk Cornish, MP for North Abaco, and John Pinder, South/Central Abaco, along with Local Government leaders Donald Rolle and Terrece Bootle-Laing and technical leaders are also joining the delegation. Minister Sears addressed staff at the Abaco office Wednesday, December 8, and underscored the need for the Government to prioritize what is being done in the Commonwealth of The Bahamas. He emphasized that islands and cays devastated by Hurricane Dorian will be given priority.

“It means that as we rebuild we have to do it differently and build with resilience and sustainability,” he said. “I am asking everybody as we meet, let’s have a common objective to make this place that we call home — this Bahamas the template for what a sustainable, resilient small island state can be. We cannot just build back the way it was. It has to be stronger, it has to be better. This is how you turn a misfortune, a disaster into an opportunity. We are moving forward to embrace an opportunity to become the best small island nation state in the world,” added Minister Sears.