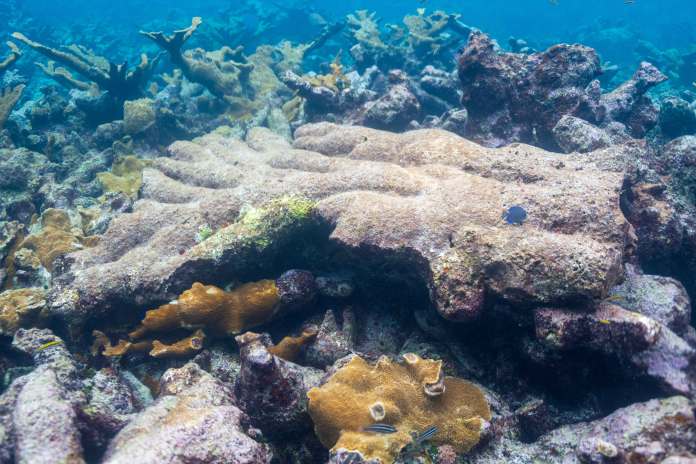 As global warming continues to trigger mass bleaching and wipe out corals worldwide, the fate of reef-building ecosystems – which help to provide food, jobs and protection from ocean storms – is tightly linked to the heat-tolerant survivors. New research published in the scientific journal, The Proceedings of the Royal Society B, has identified strains of the critically endangered staghorn coral which can survive today’s rapidly rising sea water temperatures.

“This research and more show some corals can handle temperature stress and temperature
changes better than others, and this may be the key to the future survival of coral reefs in The Bahamas,” said Dr Craig Dahlgren, a marine ecologist and executive director of the Bahamas- rooted Perry Institute for Marine Science (PIMS). He co-authored the research paper.

The Perry Institute has conducted and supported a wide range of ocean research and conservation initiatives in The Bahamas and the Caribbean for over 50 years, and maintains a particular focus on training the next generation of Bahamian scientists and conservation leaders. The non-profit collaborates across The Bahamas, working to study mangroves, coral reef ecosystems, marine protected areas and fish populations – research that works to help shape marine resource management policy in the region.

“Climate change and the deadly outbreak of Stony Coral Tissue Loss Disease, are a double blow that will put an end to coral reefs in The Bahamas as we know them unless we act now,” said Dr Karlisa Callwood, a Caribbean marine biologist and the director of community
conservation, education and action at PIMS.

“Stony Coral Tissue Loss Disease is spreading like wildfire and destroying our coral reefs. This is reality and demands urgent attention to save The Bahamas’ primary tourism product.”

This latest collaborative research by PIMS represents the first large scale effort to measure heat tolerance across a population of threatened Caribbean staghorn coral. It compared the heat tolerance of 229 corals growing in six different nurseries along the Florida Reef Tract. Researchers detected thermally tolerant corals that could survive warming seawater temperatures of up to 36.6 °F (2.57 °C ) higher than their more sensitive counterparts.

PIMS hopes to replicate the study in The Bahamas. The goal is to optimize restoration projects for this natural resource vital to Bahamians’ way of life. Coral reefs shelter fish which feed families, provide jobs for fishermen and divers, and help lessen the impact of storm devastation on a small island state.

“The Bahamas boasts the third largest barrier reef in the world and some of the last remaining healthy reefs in the Caribbean. The country’s natural variance in water temperature will help us identify how corals will respond to a changing climate,” said Dr Dahlgren, who helps manage nurseries that accelerate coral growth in optimal conditions in order to transplant them onto struggling reefs.

“Identifying and growing thermally tolerant corals could improve the survival of coral outplants, and improve their resilience to warming oceans.”

In The Bahamas and across the globe, scientists and conservationists are busy pursuing multiple strategies to help rebuild or rehabilitate underwater habitats. Getting governments worldwide to act faster and more aggressively than ever before is crucial. In his address to the United Nations Climate Change Conference (COP26) in Glasgow, Scotland earlier this month, Prime Minister Philip Davis urged world leaders to “do something” about rising world temperature due to human activity.

“Promises and agreements are easy. Action, which is to say concrete and ambitious policy changes, is a lot harder,” said Dr Callwood, emphasizing the study’s importance to The Bahamas. “Solutions require bold leadership. Governments around the globe have long
postponed until tomorrow what needed to happen yesterday – but the future is now, and the outlook for reef health is grim without quick and decisive action across all sectors public and private alike.”

According to both Drs Dahlgren and Callwood, the prime minister got it right. We must do something now. Dr Craig Dahlgren added, “To get this right, and fast, prosperous countries like the United States and the Europeans must live up to their global climate change funding commitments in order to bolster and compliment leadership in the Caribbean Sea and elsewhere.”

Half of the world’s coral reefs are dead and more than 90 percent are on track to die by 2050. It’s a tragic state of affairs that’s rapidly transforming once beautiful reefs into white skeletal graveyards.

“In The Bahamas, we must demonstrate global leadership by allowing these and other studies to proceed, so we can develop solutions to save the coral reefs we so love, and which our economy depends on,” concluded Dr Callwood.