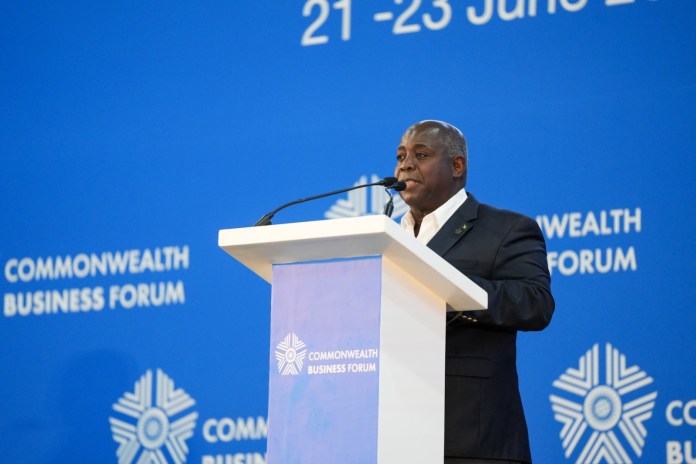 While addressing the Commonwealth Business Forum at the Commonwealth Heads of Government Meeting (CHOGM) 2022, on June 22, 2022, in Kigali, Rwanda, Prime Minister and Minister of Finance the Hon. Philip Davis said that the world was currently experiencing a number of “once-in-a- generation” challenges.

“The health and economic hangovers of the Covid-19 pandemic linger on,” Prime Minister Davis said, while speaking on the topic “Financing Blue-Green Growth for Sustainable Islands”. “And the war in Ukraine is exacerbating a number of economic challenges: rising inflation, supply-chain issues, rising unemployment, rising food costs coupled with rising food shortages – the list goes on.”

“Amidst all of it, the negative impacts of climate change remain the most fundamental, existential threat,” he added. “But that threat is not evenly-spread. Those of us, least-responsible for the carbon emissions which drive climate change, are suffering from the greatest negative impact.

“For us it is not simply a threat, but a clear and present danger – a danger which affects our daily reality.” Prime Minister Davis pointed out that the Atlantic hurricane season started 22 days prior; and the forecast was for more storms, and storms of great intensity.

“A handful of geological facts highlight our widespread vulnerability,” he noted. “Our archipelago is spread over 100,000 square miles. Ninety-five percent of The Bahamas consists of the seas and oceans. We are an Ocean State.” Prime Minister Davis said that the highest elevation in The Bahamas was Mount Alvernia, on Cat Island, that rises to approximately 206 feet (64 metres) above sea-level.

“Eighty percent of our land lies less than 1.5 metres above sea level,” he pointed out. “As such, it is vulnerable to floods caused by rises in sea level, along with storm surges due to hurricanes.

“When the storms come, we have no escape,” he added. “We do what we can to shelter, but we are at the mercy of forces far beyond our control.” Prime Minister Davis stated that, despite those dangers, Bahamians did not wish to live as victims.

“Like people the world over, we want dignity and an agency in determining our lives and livelihoods,” he said. “With the right investment in infrastructure, and access to much-needed funds and technical support, we can take great steps to ensure our survival. “But we cannot do it alone.”

Prime Minister Davis said that The Bahamas needed partners to support it in its efforts.

“And we do not think it is too much to ask those who have contributed so much to climate disaster to step forward and step up in partnering with us to mitigate against its impacts,” he said.

He added that, for The Bahamas, financing for the Blue Economy went even further; and that could build both physical and economic sustainability.

“At the beginning of my remarks, I mentioned some of the harshest economic conditions facing the world,” Prime Minister Davis said. “The Bahamas is experiencing the same headwinds.”

“While we have little economic power to affect the global outcome, we are pulling levers in our own domestic economy to minimise the harm to our people,” he added.

“Rather than merely debate the old binary choices of austerity versus growth, we wish to promote the smart choices and opportunities in our Blue Economy. “But we, again, cannot do it alone.”

Prime Minister Davis noted that one day prior, the Commonwealth Secretariat published its Ocean Action Report “An Ocean of Opportunity”. That report, he said, provided an update on the progress of The Commonwealth’s Blue Charter.

“I congratulate the Secretary-General and her team on this excellent initiative, and confirm that The Bahamas will continue to give its fullest support,” he said.

“In respect of today’s discussion, I wish to highlight two striking details in the report.”

Prime Minister Davis said that the first detail was the “incredibly low level” of ocean conservation funding, available at that time. “Ocean financing is the least well-funded of all the Sustainable Development Goals,” he said. “The Secretariat calculates that, up to 2019, ocean conservation received only 0.01% of all development funding.

“I’ll say that again: ocean conservation receives only 0.01% of all development funding,” he reiterated. “The Secretariat also calculates that support for actions relating to the oceans receive less than 2% of funding from the Green Climate Fund, and only 0.7% from the Global Environmental Facility. “Why is this?

“There is no obvious answer.”

Prime Minister Davis said that, anecdotally, it appeared that everyone imagined that much more was being spent; but it was not. Perhaps, he said, the neglect had been driven by the thought that “someone else is taking care of it”.

“Whatever the reason, it is clear that if the situation is not improved, we will fail in our efforts,” he said.

“And so my charge today is to ask: ‘What can we, in this room, do to raise awareness of this? What can we do to drive urgent action for increased support?’”

Prime Minister Davis said that a second striking detail in the report was a list of traditional and innovative financing instruments and mechanisms which could be effectively deployed in the Blue Economy. He noted that those included the following:

“This list more than demonstrates that we know how to do what needs to be done,” Prime Minister Davis said.

“But why has it not been done? “Is it because we lack the will to do it?”

Prime Minister Davis noted that those in attendance had chosen to gather as friends in a Commonwealth, because they saw value in the institution.

“We have other opportunities, other fora in which to meet,” he said.
“But we gather here because the Commonwealth provides something which other organisations, our regional organisations, and the United Nations do not: a gathering of peoples connected by shared traditions and shared values,” Prime Minister Davis added.

He pointed out that, at a bare minimum, that made each Commonwealth country responsible for honouring the conditions of membership.

“At a time when needs are increasing so dramatically, why have some members withdrawn technical and other support, thereby starving the organisation of much-need funding?” Prime Minister Davis asked.

“Friends, if we see the Commonwealth as vital, necessary and urgent to secure the kind of future we have all committed to, then we have to honour our commitments to empower it to do so,” he added.

“We participate in the Commonwealth because we know we can achieve so much more by working together.

“And we also know, that we cannot do it alone.”