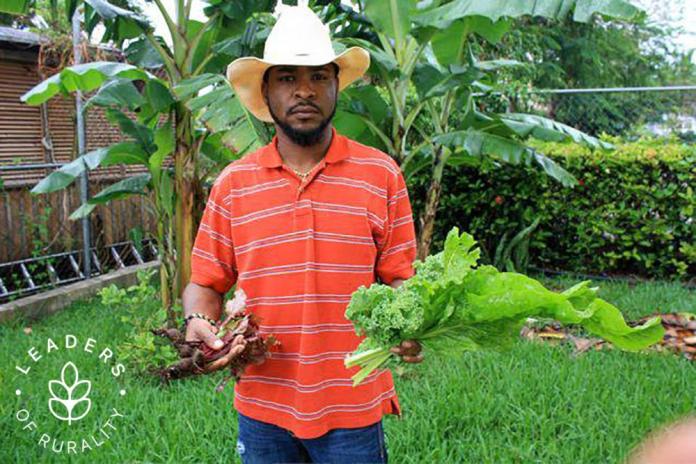 Agriculture enthusiast and prolific farmer Deon Gibson has been recognized as a “Leader of Rurality” by the Inter-American Institute for Cooperation on Agriculture (IICA) recently.

The “Soul of Rurality” award is an initiative by the agency specialized in agricultural and rural development to pay tribute to men and women who are leaving their mark and making a difference in the rural communities of the Americas, a key region for food and nutrition security and the environmental sustainability of the planet.

Gibson is known as Gibby da Farma, which is also the name of his business where he advises other farmers on best agricultural practices. Gibson is also in charge of the farm at One Eleuthera Foundation.

The organization aids rural communities in The Bahamas in becoming self-sufficient, while caring for their ecosystems and increasing production. His work also focuses on empowering and providing technical support to local farmers, as well as collaborating with ongoing agricultural education at high schools across the country.

“A farm is a living organism. Everything existing on a farm is alive, and just like each of us monitors our own health, we have to monitor the health of plants and animals, ensuring that they aren’t sick and that they have enough water and food,” Gibson said.

Gibson is also the face for the “Buy Fresh, Buy Local, Buy Bahamian” campaign, which is done in conjunction with the IICA, the Tourism Development Cooperation (TDC) and the Ministry of Agriculture, Marine Resources and Family Island Affairs. IICA Representative Mari Dunleavy, who nominated Gibson for the award said she was thrilled that spotlight was being placed on Bahamian farmers.

“As our spokesperson for “Buy Fresh. Buy Local. Buy Bahamian” national campaign, I recognized Deon’s influence and contribution to food security in The Bahamas.

So, nominating “Gibby da Farmer” to be recognized as a Rural Leader in Latin America and the Caribbean was important for IICA Bahamas. I could not be prouder and more pleased that, for the first time ever, a Bahamian agriculturalist has been recognized with IICA’s international of “Soul of Rurality” award. The Government of The Bahamas is serious about encouraging more young leaders in careers in agriculture, and Deon is a strong Bahamian role model to lead that effort,” she said.

“Mr. Gibson is a prime example of the type of farmer we need more of in The Bahamas. He is passionate about growing and sustaining food security in the country and passing his knowledge on to the youth. We are very proud of what he has been able to accomplish and we are looking forward to him continuing to excel in all his ventures,” he said.