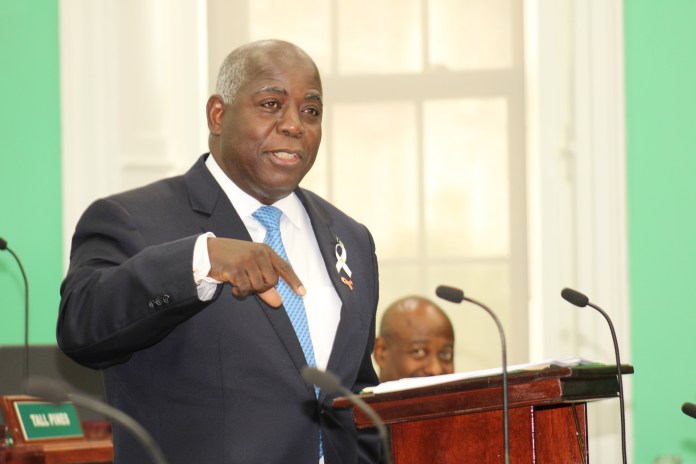 During his remarks, on November 29, 2021, to commence debate on the Fiscal Year 2021/22 Supplementary Budget and Value Added Tax (Amendment) (No. 2) Bill, 2021 Prime Minister and Minister of Finance the Hon. Philip Davis said that he was “confident” that in that Supplementary Budget – the first budget of his administration – they were starting off on the right foot, by laying “the strong foundation the country needs to guide us over the next five years.”

“This budget begins to address the immediate need to get the economy up and running again, and sets the groundwork for a plan for fiscal recovery and economic growth that the country so badly needs,” Prime Minister Davis said, as he addressed the House of Assembly.

However, he pointed out, that is no small feat. Prime Minister Davis said: “Even though the country has breathed a collective sigh of relief since the change of government on September 17th, we are not out of the shadow yet of the many crises which we inherited: the health crisis, during which hundreds of Bahamians have died, many more have been hospitalized, and thousands more have suffered from infection; the economic crisis, which was exacerbated by the health crisis, during which many Bahamians lost steady employment and fell out of the middle class; the post-Dorian crisis, in which time seemed to stand still for the victims, who saw little or no progress made on their behalf over a period of two years; and the crisis of governance during which incompetence, a lack of transparency and a lack of compassion were the hallmarks of the day.”

He noted that the challenge before the country is to address those multiple crises, while, at the same time, digging itself out of “this very deep fiscal hole.” “And so this budget seeks to stabilize our country’s finances while also providing some relief for the Bahamian people,” Prime Minster Davis said.

He added that the already poor state of the economy at the beginning of the pandemic, coupled with the blunt force use of lockdowns by the previous administration, made an already bad situation “much, much worse.”

With the new plan and vision to restore the country, Prime Minister Davis said that the Supplementary Budget was designed to achieve the following three major goals: it provides much needed relief to the Bahamian people; it reallocates funding to match the Ministerial portfolios of the Government; and it provides funding for critical expenditures which were neglected by the previous administration.

Prime Minister Davis noted that that it was also important to point out that his Government was accomplishing those objectives while not adding a single additional dollar to the national debt that was forecast in the original Budget tabled in May.

In fact, he added, the Supplementary Budget begins the process of reducing the extraordinary levels of borrowing seen under the former administration by reducing the Government’s projected deficit for the fiscal year. “I want to repeat that: we intend to take care of people and reduce the deficit at the same time,” he said.

“This balanced approach, of meeting the needs of the Bahamian people while practicing fiscal discipline, reflects the competent and compassionate approach we are bringing to governing during these very difficult times,” he added.

Prime Minister Davis pointed out that his Government’s Supplementary Budget recognizes there was an urgent need for change in the country that cannot wait for the next fiscal cycle.

The people, he said, had called for a change in vision and a change in priorities. “They have called for a compassionate, respectful, and focused government,” Prime Minister Davis said. “With this Budget, we are establishing the solid foundation that will allow us to roll out our transformational agenda and set the course for a new direction for our nation.”