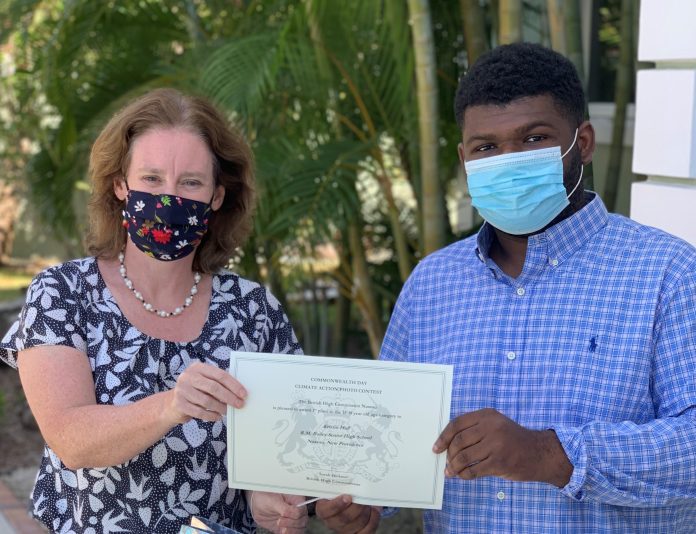 Young Bahamian photographers have successfully shown their skill behind the lens in a competition organised by the British High Commission. The “climate action” photography contest for young Bahamians aged 11-18 years old was held in honour of Commonwealth Day. The British High Commission ran the contest on Facebook during March asking for entries on the role nature in The Bahamas’ plays in combatting climate change. The High Commission worked with the Sustainable Development Goals Unit (SDG Unit) of the Office of the Prime Minister and the Bahamas Reef Environment Education Foundation (BREEF).

The winner of the contest in the 11-14 years old age category was 12 year old Ayanna Forde The 15-18 years old age category was won by 16 year old Kristin Hall . The winning photos are on the UK in The Bahamas Facebook page in the ‘Climate Action Virtual Gallery’. British High Commissioner Sarah Dickson said: ‘Congratulations to the winners for their photos and well done to everyone who entered. You truly captured the soul of how nature can help combat climate change in this beautiful country.’ Political Attaché Jerusa Ali added that the contest showcased a broad range of land and sea based solutions to climate change with images from across The Bahamas including New Providence, Long Island, Andros and Eleuthera.

Ayanna Forde, a 12-year-old student at St. John’s College, Nassau, New Providence captured first prize in the 11-14 year old age category. Upon receiving her prize from the British High Commissioner, Ayanna said that she chose to photograph her grandmother, Lolita and her sister Jennah in the garden because she wanted to convey the importance of making sure that generational knowledge of sustainable agriculture is not lost to children her age.

Her grandmother’s garden and the lessons that she has learned during the pandemic about the connection between backyard farming, food and nutrition security, and climate change mitigation served as inspiration for the photoshoot.

Over the years, Ayanna’s family has watched her grandmother transform her backyard garden with various fruit and vegetables including mangoes, avocadoes, plums, coconuts, hot peppers, peas, bananas, spinach, limes and sugar cane. Ayanna’s family helped her choose the winning image from a collection of 10 photographs shot in 5 different garden scenes.

Kristin Hall, a 16-year-old student at R.M. Bailey Senior High School, Nassau, New Providence captured first prize in the 15-18 year old age category. According to Kristin, it would have been easier to take a photo at Big Pond or the Bonefish National Park, but he wanted a unique photo that clearly reflected the objective of the competition. Kristin waded into the mangroves at South Beach to take a photo that captured the root system of the red mangroves, which helps to prevent erosion by stabilising sediments and it protects the shorelines from the effects of hurricanes, storms and floods.

His family voted on which of his mangrove photos best captured nature based solutions. Kristin’s mother Raquel, an educator, said that her son is deeply passionate about climate change mitigation and renewable energy. She added that awareness raising, through competitions such as these, is key to encouraging environmental activism and societal change here in The Bahamas. Prizes were also awarded to David Laroda who came 2 nd and Abigayl Chea winning 3 rd in the 11-14 category and Ashanti Knowles and Ginanelle Miller who came 2 nd and 3 rd in the 15-18 group.