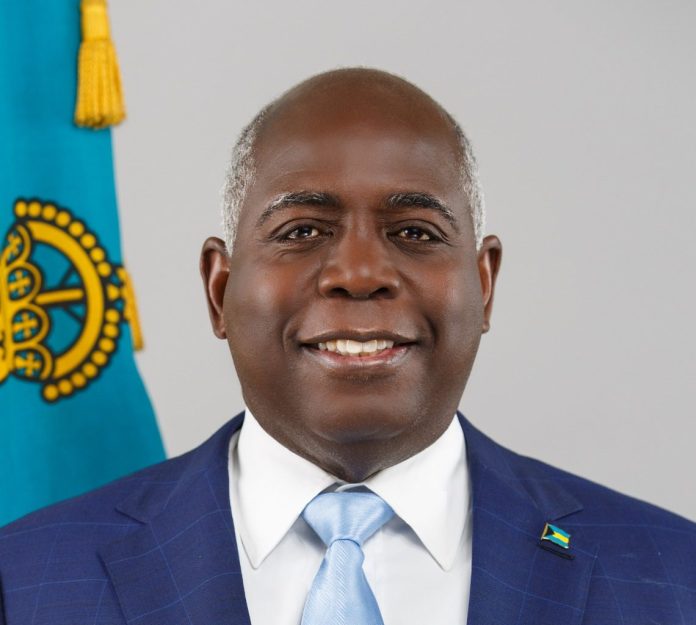 While discussing the invasion of Russia into Ukraine, Prime Minister and Minister of Finance the Hon. Philip Davis, on March 2, 2022, said that CARICOM issued a strong statement in support of the United Nations charter, that protects and preserves a country’s territorial integrity and their sovereignty.

“And, in that regard – flowing from that – is the question of whether sanctionsvwould be imposed by CARICOM states,” he said. Prime Minister Davis was in San Pedro, Belize, and recapping the second day of the 33rd Inter-sessional Meeting of the Conference of Caribbean Community (CARICOM) Heads of Government being held there.

Among those in his delegation are Minister of Foreign Affairs and the Public Service, the Hon. Fred Mitchell; Minister for Grand Bahama, the Hon. Ginger Moxey; Ambassador to CARICOM H.E. Leslia Miller-Brice; and Parliamentary Secretary in the Ministry of Tourism, Investments and Aviation John Pinder.

Prime Minister Davis noted that the general consensus was that, until the UN Security Council would pass a resolution to confirm that member states ought to impose sanctions, CARICOM heads in attendance had decided to await and abide the outcome of such a solution.

He added that a number of countries at the Meeting had indicated that overtures had been made to them, in terms of sanctions; and that was why the question came as to what they would do as a collective body.

Climate change was also on the agenda and discussed that day. “Well, that was very intense as well because, as you know, the Caribbean region is very susceptible to climate change,” Prime Minister Davis said. “The recent report that came out speaks to the dire consequences [facing] our territory, as a result of the rising temperature.”

“There, it did loom large; and we discussed the issue,” he added. “We are going to remain in dialogue; and we are going to make sure that our voices are heard in the right places.”

Prime Minister Davis said: “We discussed accessing funding for mitigation and adaptation, and the challenges we are having to access those funds; and discuss the ways and means we can sensitize the various agencies – like the Climate Fund, and the World Bank and IMF – to readdress the approach to how countries such as ours in the Caribbean, in particular, could access these funds – and not just pay
lip service to it.”

Prime Minister Davis and his delegation are slated to stay in San Pedro for the one-day Fourth CARICOM-SICA Summit, on March 3. According to CARICOM, Heads of State and Government of CARICOM and the Central American Integration System (SICA) are expected to seek to strengthen relations in the face of “multidimensional challenges”, at that Summit.

The Summit is expected to adopt the Joint Declaration of San Pedro, with commitments to strengthen foreign policy consultation; actively collaborate on socio-economic development matters, including tourism, trade and investment; and strengthen cooperation in Climate Change and public health, among other matters.

The Heads are also expected to sign a Revised CARICOM – SICA Plan of Actionadopted by Foreign Ministers of the two Regions last month, which highlights specific areas for joint dialogue and commitment to implementation, evaluation and follow-up. United Nations Secretary-General Antonio Guterres is also expected to be a Special Guest at the Summit.