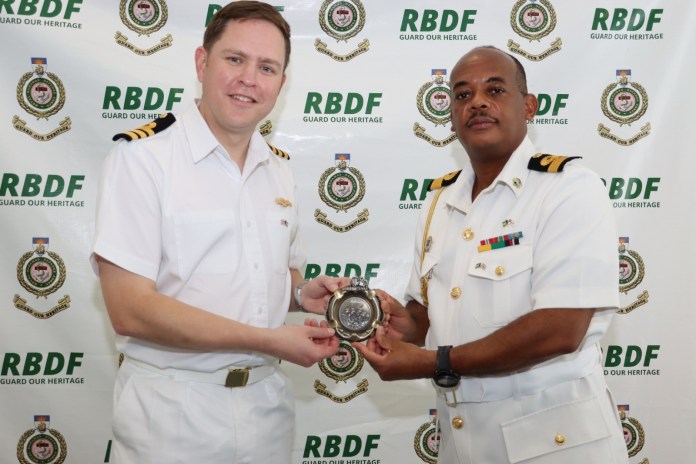 HMS Medway is the Royal Navy’s permanent presence in the Caribbean region. The Commanding officer of HMS Medway, Chris Hollingworth, and his crew are paying a visit to Nassau from 25 –28 January in preparation for hurricane season 2022.

HMS Medway is a River-class Offshore Patrol Vessel and has been in the region since the beginning of 2020. In addition to providing support to Britain’s Overseas Territories in the region (such as Cayman and the Turks and Caicos Islands), HMS Medway provides support and humanitarian aid in the event of a hurricane or other natural disaster and works side-by-side with regional law enforcement, helping to stop the flow of illegal drugs from South America to Europe and North America.

During HMS Medway’s visit Commander Chris Hollingworth will meet with Commodore Raymond King of the RBDF and his team. He will pay an operational visit to the National Emergency Management Agency and discuss planning with Captain Stephen Russell. He will also have a courtesy call with the Prime Minister and is planning to hold operational discussions with the Minister of National Security, Wayne Munroe QC and Minister of State Myles LaRoda. He will meet with a wide range of stakeholders who play a role in disaster relief efforts including government officials and civil society.

As this is the Platinum Jubilee year, marking the 70th anniversary of Her Majesty The Queen’s reign, the Commander had the honour of planting two Lignum Vitae trees with the British High Commissioner and the Bahamas National Trust. These inaugural plantings were part of the Queen’s Green Canopy initiative which aims to leave a positive environmental legacy for generations to come.