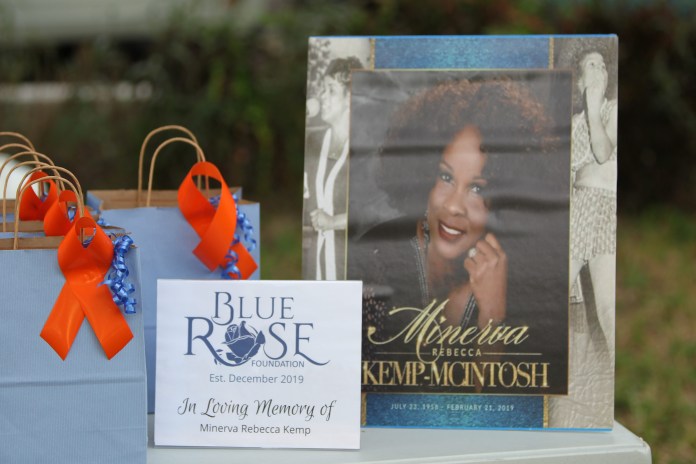 In honor of their late mother Minerva Kemp, who died after being diagnosed with leukemia, siblings Philip and Ajna Bowe launched a not for profit project in 2019 called the Blue Rose Initiative.

Philip Bowe says that their late mother was a performer who loved the stage and Christmas was her favorite time of year, so it was fitting that they host a ceremony in her honor during Christmas time at the Cancer Society of the Bahamas. Children diagnosed with leukemia, were invited to the event where a message was given by Pastor Mario Moxey complete with a rendition in song by Philip Bowe and several performances from the Essence Band in which Ajna Bowe is a part of.

“The mission of the foundation is to support, specifically those children with leukemia and other blood cancers so we extended an invitation to Nurse Demeritte at the oncology center. We gave her our vision and she worked with us to compile a list of kids and we’re here today.

“We still love to entertain, you know. My mom was very much a local singer loved to sing and do performing arts in Grand Bahama and so that runs in my sister and I blood.”

Last year they celebrated with a dinner, but due to Covid-19 protocols this year, they decided to hold a smaller event. Philip Bowe explained that they felt lead to continue the tradition they kicked off a year ago despite challenges brought on by the pandemic.

“We still wanted to put on a performance, so we figured that we’ll still do something but just have it privately for children with leukemia and other blood cancers,” Bowe said.

Philip Bowe is co-chair of the Blue Rose foundation. He says that when they chose the name, they did it because of their mother’s favorite color and flower, however after researching the meaning of the blue rose they were pleasantly surprised to find that it is widely recognized as a symbol of achieving the impossible.

Bowe says his mother lived 17 years after doctors diagnosed her with the deadly cancer, giving her only several months to live.

“To feel even closer to her we wanted to give back. You know my mother was a big philanthropist especially in terms of giving. She loved children so we wanted to feel close to her in a sense by putting on a show like this” he said.