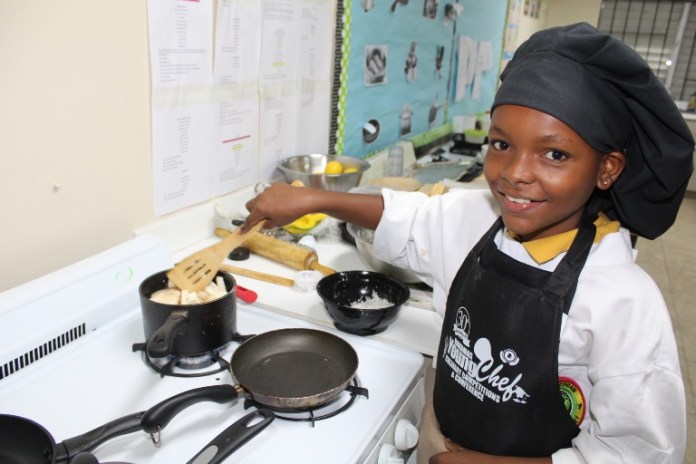 The national round of the Bahamas Young Chef Culinary Competition (junior high school division) ended in an unusual way Thursday with a delay in the announcement of the winners.

The 30th annual competition, organized by the Department of Education in conjunction with Robin Hood Flour and Mahatma Rice, originally scheduled for Wednesday, November 9 was postponed due to Tropical Storm Nicole.

At the onset, 13 Family and Consumer Science students from schools in New Providence and the Family Islands dressed in aprons and chef caps began measuring, chopping and mixing in the kitchen at A. F. Adderley Junior High School. Two hours later they produced flour and rice dishes to the theme “Bahamian Culinary Arts: Sustainability Across Land and Sea” of such disparity as Level up Dumplings, Snatched Seafood Rice Fusion, Rice Flour Fettuccine with Sheep Runners Ragu, Wheat Tuiles Two Ways, Wild Board Napoleon and Heart of Love Tropical Conch Cakes.

Chef Clement Williams urged the students to accept the judges’ critiques. “Be open and take the constructive criticism which will not only help you today but tomorrow,” he said.

He congratulated the students and encouraged them to work together to create long-standing relationships.

“It’s not just about today, it’s about 10-15 years from now. As chefs you’ll be collaborating and networking with one another. I’m really excited to see what the future holds for each and every one of you because whatever you do in here today I can see that at a whole new level in couple of years. Take the concept, invent it and bring it to a whole new level. We have too much indigenous product not to see it being utilized in every restaurant in The Bahamas.”

Chef Houghton advised the students about microgreens. “Don’t just throw them on there. Go ahead and put them on there so you don’t see the back ends of them,” he said. “Put it on there so they have a little bit more purpose. Sometimes less is more because you don’t want to cover your nice ingredients.”

He advised Amina Eneas, 10, winner of the New Providence District, of her “amazing” work.

“Not only is there a good story in terms of your age and poise, but the food tastes good too,” he said.

“You were focused. You stand in the land of giants and you fit right in. I’m super proud of you. We’re excited about you and your future. You melt my heart. It was unbelievable.

“She cut herself, she bandaged herself up; she was not rattled and did not get upset. She washed her hands and went back to work. I wouldn’t change anything.”

“I am just going to say well done. It was unbelievable – all the layers, the flavors on point. Every sauce, every condiment. Everything on the plate has to have a purpose. That’s very important for everyone. Bravo! People always do beans and salad when they cook vegan. You took it to the next level.”
Raquel Turnquest, Education Officer, Family, and Consumer Science Unit, thanked the judges and participants. She informed that the winners will be revealed during a virtual awards ceremony which is planned for a date to be announced.