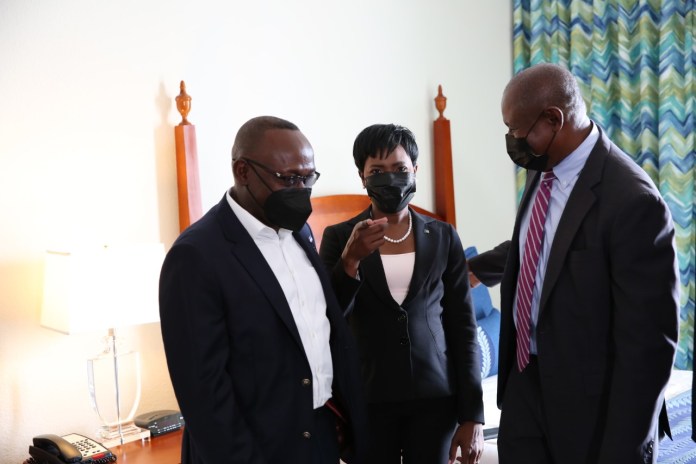 FREEPORT, Grand Bahama — The process of finding a new buyer for the Grand Lucayan resort, began with the introduction of the new Board on Thursday, January 6, 2022, which has the responsibility to attract new investors, assist with negotiations and close the deal for the final sale of the property.

The new Board was introduced to the public on Thursday by Deputy Prime Minister and Minister of Tourism, Investments and Aviation, the Hon. Chester Cooper, during a press conference at the Grand Lucayan.

“I am very proud of the members of this Board,” said the Deputy Prime Minister. “We have a very distinguished board with members who have deep experience in tourism, in law, in accounting and in the Grand Bahama Business community. This is a Board of professionals from a broad cross-section of our country.

The new Chairman of the Board is Julian Russell, a Chartered Accountant, who also once served as a former Senator for the Progressive Liberal Party. Other members include Cassietta McIntosh-Pelecanos, attorney and Deputy Chair of the Board; Stewart Bowe, a former senior executive at Atlantis; Ernie Cambridge, an icon in the tourism industry in Grand Bahama; Merrit Storr, an attorney; Edward Rahming, a member of the former Board and a Chartered Accountant; and Carla Claire, an attorney.

The Tourism Minister, along with the Minister for Grand Bahama, Hon. Ginger Moxey, took the new members of the Board on a tour of the resort, which was followed by a meeting.

Minister Cooper said the meeting with the Board and the introduction of the Board to the members of the public was an important transitional step.

“Over the past several weeks, we have been working diligently to negotiate out of the deal that existed before; and we have terminated that deal by mutual agreement. Now, we are moving forward to find a new partner and a new investor for this property.

“This is a fantastic asset on the waterfront here and this is an opportunity to strengthen the tourism product here in Grand Bahama: the goal of this board is to ensure that it comes into fruition in the shortest time frame possible. So, today in our board meeting, we will be discussing the way forward.”

The Deputy Prime Minister noted that there are at least six investors who have expressed serious interest in the purchase of the Grand Lucayan, adding that the list of possible investors is expanding every day. He said this is because there are a lot of people out there who understand the value [of] the Grand Lucayan and the other opportunities that exist on the island of Grand Bahama.

Minister Cooper pointed out that the tourism product of Grand Bahama centers around not just the Lucayan Resort, but also around the East and West End communities, where interest in building resorts in those areas has been expressed.

The Deputy Prime Minister reiterated that the ideal investor for the Grand Lucayan resort is not just someone or a group of people with deep pockets and significant resources, although he added that such a position is very important. But he said the ideal investor is one with a vision for the property and a shared vision for the development of tourism and the island of Grand Bahama.

“That’s what we are seeking and I know that some of the potential investors fit that bill and we’re very excited about that.”