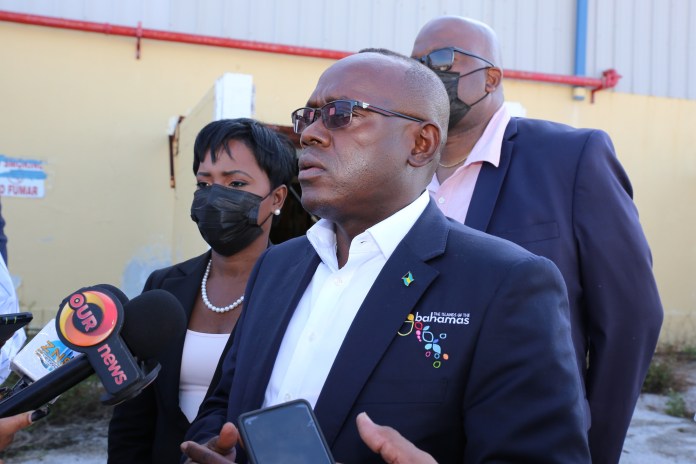 FREEPORT, GB – Minister of Tourism, Investments and Aviation, Hon. Chester Cooper says that something has to be and will be done in the shortest time possible to revive and reconstruct the Grand Bahama International Airport. Following a tour of both the national and International sections of the Grand Bahama Airport on Thursday, January 6, 2022, the Deputy Prime Minister called his trips to the airport distressing and embarrassing.

“I am embarrassed by what I see at the Grand Bahama airport,” said the Deputy Prime Minister, who is also responsible for aviation. “That is a part of my ministry and you can be assured that something is going to happen here very quickly. Perhaps cosmetically in the early stages, to make sure that we patch some of the damage that we see, which is a constant reminder of Hurricane Dorian two years ago.”

Minister Cooper said that he has already spoken with officials from the Airport Authority to see what can be done to cause there to be some immediate shift at the Grand Bahama International Airport.

“The reality at the moment is that we need to maintain the operation in a safe manner, and so that what we will seek to do,” said Minister Cooper.

“You will be aware that we are looking at private public partnerships for nine airports in the Bahamas and Grand Bahama’s Airport is priority number one, in terms of causing there to be a significant development here, that will cause investors to the island to be proud and for visitors to the island to feel welcomed at a new gateway.”

The Deputy Prime Minister said this has become a priority in terms of airport developments and they are hoping to move forward with plans for the refurbishment of the Grand Bahama International and national airports within this year. He said the development of the airport is opened for private participation.

He said that the Government is set “to keep an open mind” in terms of how they approach the redevelopment of the airport, noting that there is a possibility that the investors for the Grand Lucayan Resort might be opened to the idea of also investing in the airport. The Deputy Prime Minister thanked the staff at the GB airport for the work that they have been doing, under the circumstances, to keep the operation running smoothly and safely. They were able to tour the tower and inspected equipment to make sure that it was safe for the public and visitors alike.

“We are very concerned about the working conditions of the people at this airport,” said Deputy Prime Minister Cooper. “Many of these people still operate five or six at a time in a small trailer, using out-houses.

“This is the gateway to our second city and we’re hoping to attract big investors here to the island of Grand Bahama, so it is not a welcoming experience for investors to Grand Bahama.”

In the meantime, he added that while the airport in its present state is running safely, there is some investments that needs to be made in the short term, inclusive of a generator and some enhancements to the tower.

“Those are going to happen in the shortest possible timeframe,” said the Deputy Prime Minister.

“The Minister for Grand Bahama has made her displeasure known in relation to recent events at the airport. So, it will be done.

“But the reality is we recognize that something has to be done and done swiftly.”

‘Grand Bahama Clean’ to be launched