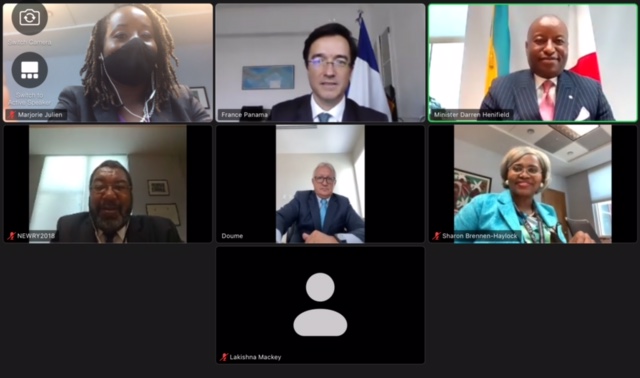 The Ministry of Foreign Affairs wishes to advise that, in a virtual meeting held 17th May, 2021, the Minister of Foreign Affairs, the Hon. Darren A. Henfield MP, received the Copie d’Usage of the Ambassador-designate of France to The Bahamas, H. E. Arnaud de Sury d’Aspremont.

During a brief meeting held after the Minister received the Copie d’Usage, both parties acknowledged the longstanding friendship and bilateral support between the two countries. The Minister thanked the French Government for the humanitarian assistance and relief provided to The Bahamas following the devastation caused by Hurricane Dorian as well as France’s support of the COVAX vaccine facility. In referring to France’s decision to remove The Bahamas from the list of non-cooperative states and territories in tax matters, as well as a similar decision of the European Union, the Minister thanked France and reminded that it was important that the goal posts not shift continuously. Speaking on the same issue, the Ambassador noted that the removal of The Bahamas was a homage to the work done by The Bahamas.

Moreover, several matters of mutual interest were discussed, which included, assistance in French languagetraining and climate change reform. Both sides agreed on the need to continue the deepening of relations, for which technical meetings will be held during the course of the year. While the presentation of the Copie d’Usage will allow the Ambassador-designate to undertake activities at the functional level, he will present his Letters of Credence formally to the Governor-General at a later date.