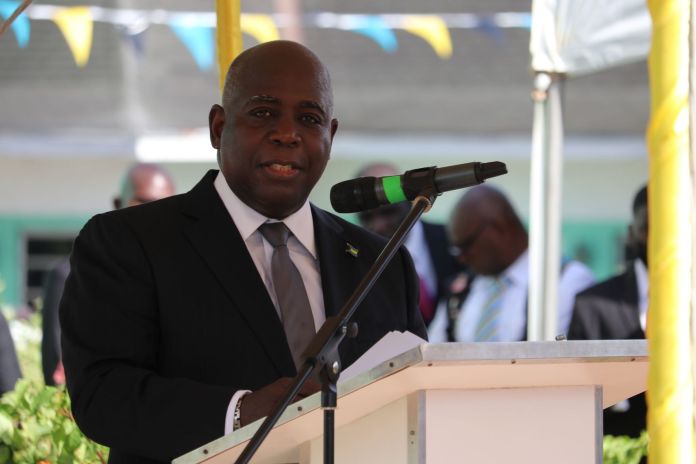 During his remarks at the Handing-Over Ceremony of the Office of Commissioner of Police of the Royal Bahamas Police Force (RBPF),

on July 5, 2022, Prime Minister and Minister of Finance the Hon. Philip Davis noted that formal policing in The Bahamas went back to 1840, making the RBPF one of the longest-established institutions in the country. He added that traditions, such as the Handing-Over Ceremony, symbolised not just the continuity of the institution, but also the continuity of Bahamian democratic traditions.

“At a time when so many other democracies are experiencing significant challenges, we should be justifiably proud that, here in our Bahamas, the fundamental role and responsibilities of policing are so deeply entrenched,” Prime Minister Davis said, at the ceremony held at the RBPF Headquarters, on East Street.

“This transfer of new leadership today, at its heart, is a renewed commitment to the fight against crime,” he added. “Our administration is also committed to the wider responsibilities of policing, which is to maintain public order and safety, and to enforce the law.”

Prime Minister Davis pointed out that, during the past 49 years since Independence, this was only the second Commissioner of Police to be appointed by a Progressive Liberal Party Administration. “And so in the Commissioner, we think it important that he is able to work within our approach to policy, which reflects both the progressive values we represent, and the mandate upon which we were elected,” he said.

Prime Minister Davis continued: “First and foremost, this means that we see policing in general, and the fight against crime in particular, as an effort that must be conducted in partnership with the Bahamian people.” He noted that in the platform document, ‘A Blueprint for Change’, his Government made a solemn commitment to strengthen the nation’s security by ‘… enhancing crime fighting methodologies in our aggressive war against crime’.

“We stand firmly behind that commitment,” Prime Minister Davis said. “That said, we do not view policing as something which is to be inflicted upon our citizens and residents,” he added. “The reflexive, heartless approach of recent years of ‘just lock them up’, is not one that we endorse or share.”

Prime Minister Davis said, to be clear, however, his Government will continue to increase its muscular response to crime, and violent crime in particular.

“We will continue to use every available resource to dismantle the gangs which plague our society, and work with neighbouring countries to stop the flow of illegal weapons into The Bahamas,” he said. “Gangs and weapons are the two critical factors driving the high murder rate we are currently experiencing, with the almost weekly tit-for-tat killings between gangs.”

Prime Minister Davis noted that more aggressive policing, on its own, was not the whole answer.

“We understand that fighting crime requires more than just responding to an offence,” he said. “It’s also about conflict resolution,prevention, intervention, punishment, and rehabilitation. The Government will continue to spend more on community policing and ‘violence-disrupters’. And we will continue to offer safety net programs for young people.”

Prime Minister Davis noted the Urban Renewal Trust Foundation was recently formally relaunched, to assist in this effort. He added that other initiatives, such as ‘Swift Justice’, and the ‘Citizens’ Justice and Security Programme’ will continue to strengthen his Government’s approach.

“We will also continue to invest in education and job programmes that can confront and overcome the sense of hopelessness felt by so many young men, who resort to a life of crime as a means of gaining self-esteem and opportunity,” he said.

“And with the building of a new prison, and an expansion of rehabilitation schemes, we will do what we can to ensure that when people complete their jail sentences, and re-join society, they are supported and enabled to ensure that they do not re-offend,” he added.

Prime Minister Davis pointed out that he set out those thoughts in relation to policing to highlight the charge given to both the outgoing and incoming Commissioners. He also noted that the background and experience of both represent “some of the finest in the policing tradition of our country”.

Prime Minister Davis said that, since joining the RBPF in 1983, outgoing Commissioner Paul Rolle had enjoyed a distinguished career in law enforcement.

“Among his many assignments, Commissioner Rolle served as Officer-in-Charge of the Central Detective Unit, Head of the Police Training College, and Officer-in- Charge of the Crime Detection Unit (CDU), during which time he concluded and placed more than 2,400 cases before the Supreme Court,” he noted. “After attaining the rank of Assistant Commissioner of Police in 2017, Mr. Rolle was instrumental in establishing the Anti-Corruption Unit. “My government and I thank Mr. Paul Rolle for his public service, and wish him well in his new assignment.”

“He has worked in the Traffic Division, the Criminal Investigations Department, and served as a Divisional Commander; on the Selective Enforcement Unit,” he added. “He has been part of the Central Detective Unit, and, as Assistant Commissioner was a member of the Senior Executive Leadership Team when, in 2017, he assumed responsibilities for the Crime Management Portfolio.

Prime Minister Davis pointed out that, following his return to active duty in September 2021, Mr. Fernander took on a “new and more challenging role” when he assumed the Criminal Investigations and Intelligence Portfolio as Deputy Commissioner of Police.

Prime Minister Davis also mentioned that, in 2013 Mr. Fernander was shot during an attempted armed robbery, an incident “which not weaken his resolve to serve in law enforcement”. We look forward to his bringing the same courage and tenacity to his role as Commissioner,” he said.

Prime Minister Davis said that it was arguable that the job of policing in The Bahamas has never been more challenging or more demanding. “The change of leadership signified by today’s handing-over ceremony, contains within it my administration’s commitment to strengthen the rule of law, the preservation of good law and order and the maintenance of the peace, and a resolute determination to win the fight against crime in our country,” he said. “Commissioner Fernander is the right man for the job.”