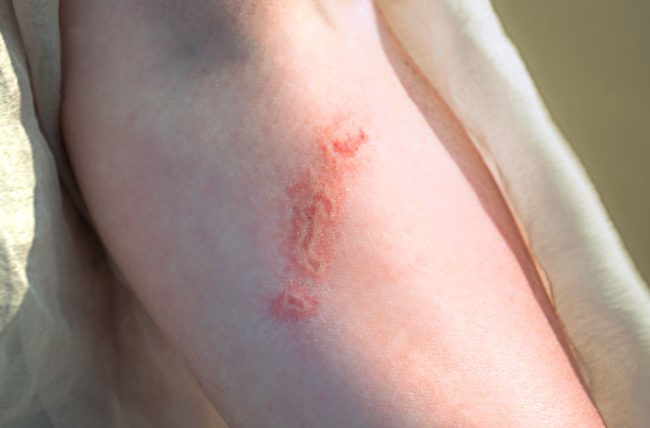 Despite what you may have heard, it’s a myth that peeing on a jellyfish sting does anything to ease the pain. Not only are there no studies to support this idea, but urine may actually worsen the sting, too.

To explain why, let’s turn to emergency medicine specialist Thomas Waters, MD, an Emergency Medicine Physician in Cleveland Clinic, Ohio. Let’s take a closer look at that myth, which has been around for centuries. As you probably know, jellyfish swim around in the world’s many oceans. They are umbrella- shaped gelatinous blobs with long trailing tentacles that propel themselves through the water with a pulsing, rhythmic motion.

The tentacles on jellyfish have stinging cells called nematocysts that contain venom. Coming into contact with a jellyfish, be it in the water or on a beach, results in the activation of these stingers and the release of venom. So, if you get stung, it hurts. It hurts a lot. Somewhere along the way, a theory grew that peeing on a sting could neutralize the venom and make the intense pain go away. The logic is based upon ammonia and other compounds found in urine.

The truth, though? Peeing on a jellyfish sting can actually cause stinging cells to release even more venom. (That has to do with urine being mostly water, an issue we’ll cover in a moment.) “Jellyfish stings are painful enough without amplifying the symptoms,” says Dr. Waters. “You might mean well by peeing on a sting, but putting the wrong substance on it can really make things worse.”

Plus, let’s be realistic: Nobody wants to be peed on. So, what should you do to treat a jellyfish sting? First, keep your pants on — literally and figuratively. Then, follow these suggestions:

Step 1: Remove jellyfish tentacles
Use seawater to wash off the tentacles right away, but avoid any vigorous rubbing. The reason? Rubbing can cause the jellyfish’s nematocysts to fire, which means the barbed part of the tentacles would release more toxin into your skin. One important note, though: Use only seawater on the affected area while removing the barbs.

“Do not use fresh water, such as bottled water or from a faucet,” cautions Dr. Waters. “If you do, that can cause the nematocysts to activate and worsen the sting.”

Step 2: Look for barbs
If you see any barbs left in your skin, use tweezers to carefully pluck them out. If you don’t have tweezers available, you can gently scrape the area with a credit card or similarly shaped plastic object to get them out of your skin.

Step 3: Pain treatment
Once you remove the tentacles, apply vinegar or rubbing alcohol to where you were stung. This can help relieve the pain and release the toxin. Immersing the affected area of your body in hot water is another option, but only after all the barbs have been removed, says Dr. Waters. Place the sting in a hot bath or under a hot shower for 20 minutes. The water temperature should be 104 degrees Fahrenheit to 113 F (40 degrees Celsius to 45 C). If you don’t have a thermometer, use the hottest water temperature you can tolerate. (If you’re treating a young child, always test the water temperature first.)

Later, you can apply acetic acid (which is found in vinegar), calamine lotion or hydrocortisone cream to dial down the pain. Additionally, an ice pack can help reduce swelling and antihistamines can limit itching and any skin rash.

Now the good news: While jellyfish stings are quite unpleasant, most don’t require attention from a doctor. Stings typically improve within a few hours. Sometimes, a rash with red, purple or brown splotches may linger for a few weeks. Scars are possible, too. The seriousness of the situation also depends on the type of jellyfish you encounter. There are thousands of species of jellyfish around the world — and some can deliver a fatal dose of venom. (The worst is the box jellyfish, or sea wasp, found off of Australia’s northern coast.) Keep an eye on your symptoms and seek medical help if you experience:

Your doctor or local clinic may also have other options for pain and itching relief in the event of more severe or lasting reactions.