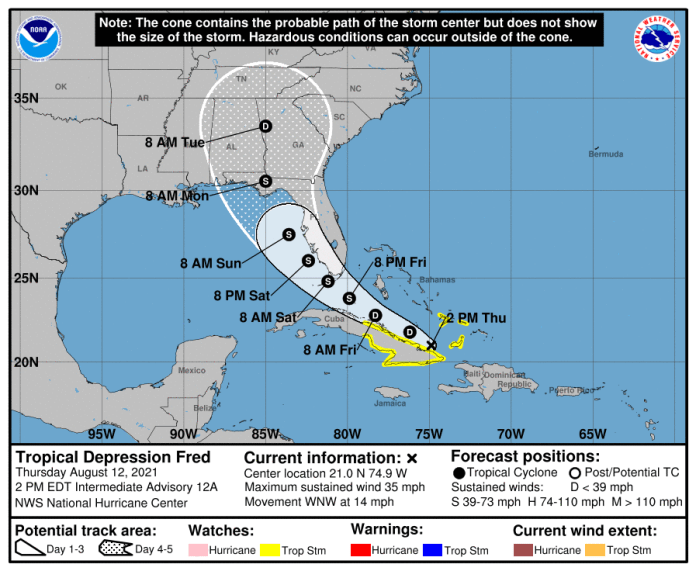 ISSUED BY: PATRICIA WEEKS/BASIL A. DEAN

Fred is moving West – Northwestward North of the Northern Coast of Cuba.

Fred is moving toward the West-Northwest near 14 mph and this motion with a decrease in forward speed is expected for the next day or two. A turn to the Northwest is expected by Saturday. On the forecast track, Fred is expected to move near the Southeast Bahamas today, move along or just North of Eastern and Central Cuba later today and Friday, and be near the Florida Keys and Southern Florida on Saturday.

Maximum sustained winds are near 35 miles per hour with higher gusts, mainly in squalls to the Northeast of the center. Little change in strength is expected through tonight. Slow strengthening is expected Friday through Saturday, and Fred is forecast to regain tropical storm strength during that time.

Residents in the Southeast Bahamas could experience ggusty winds, showers and thunderstorms, which could be severe at times resulting in 1 to 3 inches of rainfall with isolated amounts of 5 inches, as the depression passes South and Southwest of the Southern Bahamas this afternoon and tonight.

Residents in low-lying areas should prepare for possible flooding.