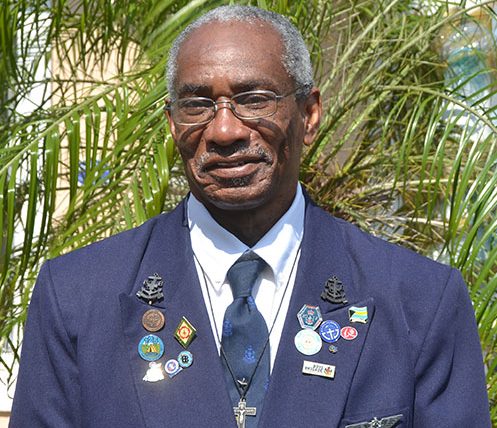 Through rain, shine, retirement and a battle with prostate cancer, Captain Henry Curry has helped guide scores of young men through Boys’ Brigade and the Governor General’s Youth Award (GGYA) – two programmes that equip its participants to succeed in life.

GGYA delivers the Duke of Edinburgh’s International Award which takes its name from His Royal Highness Prince Philip, the Duke of Edinburgh, who died on April 9. The Award operates in more than 130 countries and territories, helping to inspire millions of young people to dream big, celebrate their achievements and make a difference in their world.

For his dedication, Captain Curry is among 100 inspirational volunteers across the globe who are set to receive an official commemorative coin celebrating the life and legacy of the Award’s patron. The coin will be accompanied by a letter of thanks from HRH The Earl of Wessex, Prince Edward, the youngest child of Queen Elizabeth II and Prince Philip.

“Captain Curry has been with us for more than 30 years. He is our longest serving volunteer. He comes to us from St Barnabas Anglican Church where he leads their 23rd Bahamas Company of Boys’ Brigade. Both programmes have similar personal and social goals, including community service, cultivating skills, fitness and adventure,” said GGYA’s national director Jacquetta Lightbourne-Maycock.

Young people are able to simultaneously gain badges from Boys Brigade and Awards from GGYA.

“These personal achievements help them to find their purpose, passion and place in the world, and to stand out with distinction,” said Mrs Lightbourne-Maycock.

“Although many of our volunteers are known for stepping up and staying around, Captain Curry stands out. For his dedication and leadership throughout the decades, we thank him. He’s served on GGYA’s Management Council. He’s often among the first to respond when we reach out to our volunteers, and he gets his unit out to many of our planned activities. If every youth organization could have someone like Captain Curry on their team, we’d be better off as a nation.”

In 1973, a young Basil Tynes and his brother, Peter, joined Captain Curry’s 23rd Company. He credits the organization with his spiritual growth and development and was thankful for the opportunity to be mentored by “a giant of a man.”

“This time I assumed the post of chaplain with Captain Curry still very much in charge. Under his leadership, the 23rd Company produced high ranking police officers, lawyers, accountants, bankers, doctors, medical personnel, priests, bishops, ambassadors, chefs, you name it. Captain Curry can hold his head high in that regard.”

When the modern-day Award came on stream in 1987, Captain Curry saw how it could enhance Boys’ Brigade. Like the Duke of Edinburgh Award, the 23rd Company was known to camp out. That adventurous journey component and the discipline GGYA fostered attracted him to the Award.

“GGYA is for anybody, including the children who believe they can’t do anything in life,” said the 78-year-old who chairs the New Providence Battalion and the Western Caribbean Fellowship of Boy’s Brigade.

“It’s not based on academics. It’s based on your resiliency and the goals you set for yourself. That’s what it’s all about.”

A non-competitive and flexible programme of cultural and adventurous activities, the Award is for young people 14 to 24-years-old, whatever their background or ability.

Each participant learns a skill, improves their physical fitness, volunteers in their community and experiences a team adventure in a new environment. Many use activities in which they were already engaged to fulfill requirements of the Award.

Success in the programme isn’t competitive rather it is a personal challenge, one measured by young people logging their effort and their progress in each area over a fixed period. Supporting them in their work at Bronze, Silver and the Gold level is a network of adult volunteers, unit leaders, assessors and the national office.

“Participation in GGYA has influenced my service, skills, survival techniques and offered me great companionship with other participants,” said Shane Oliver, a Bronze level participant. “Captain Curry has taught me to be dedicated to a cause and open-minded about my opinions.”

Whether he’s teaching young people how to swim or demonstrating backyard farming techniques, leading a unit is as rewarding to Captain Curry as it is to the youth.

In half a century, his commitment to youth development has never wavered. Even when he fought prostate cancer in 2011, Captain Curry was a model for how to pull through an ordeal.

“Despite all of his health challenges he remains on top of his game,” said Father Tynes, who for 21 years served as the 23rd Company’s chaplain.

“He has been an advocate for the Governor General’s Youth Award programme not just in the 23rd Company at St. Barnabas, but he has advocated for its use across the board with all of the companies in The Bahamas…What amazes me is that even at this stage in his life he is able to relate to the young boys and is able to provide Godly counsel for them.”

“What I’m working for is to know that I can change some boy’s life,” said the father of six, who lost one of his five sons, a police constable, to murder back in 2005.

“What makes me feel good is when a young man says, ‘Captain Curry, do you remember me?”

Sometimes it’s a difficult task putting a name to a familiar face when what stands out are moments and memories not monikers.

“My reward is knowing that I’ve touched somebody’s life and they’re being productive and even if they’re not productive they can recognize what was done for them.”

Highlights from The Bahamas National Expo in Dubai 2020