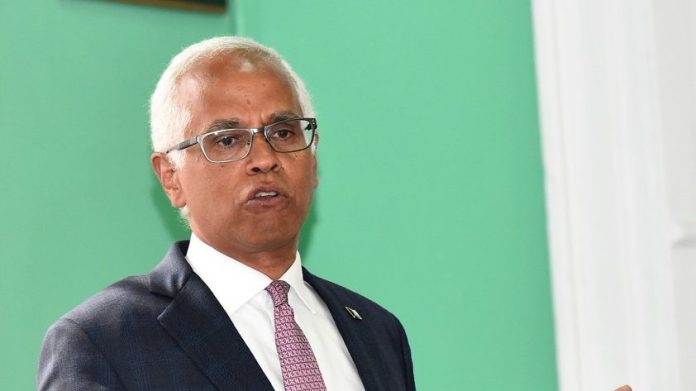 The recent Home Porting of Royal Caribbean’s Adventure of the Seas is expected to pay huge dividends for the Bahamian economy in general, and the tourism economy in particular, Minister of Tourism and Aviation, Hon. Dionisio D’Aguilar told House Members. Minister D’Aguilar said while the Home Porting has already begun paying dividends for countless Bahamians and the economy since its launch one week ago, the down-the-road outlook for Home Porting is just as positive as it is estimated that Home Porting will bring 30-35,000 cruise visitors into The Bahamas over the course of 2021 with these 30-35,000 cruise visitors anticipated to spend approximately $50 million during their week-long stays in The Bahamas.

Delivering his contribution to the 2021/2022 National Budget Debate in the House of Assembly (Tuesday, June 16, 2021), Minister D’Aguilar said the Home Porting of the Adventure of the Seas, which took place on Saturday (June 12) during ceremonies held in downtown Nassau, signaled the first time that a cruise ship began a cruise “right here in The Bahamas. Not in South Florida. Right here in Nassau.” He said it simultaneously signaled the return of cruising to The Bahamas, and Prince George Wharf, after a 15-
month absence due to the global COVID-19 Pandemic.

By starting the cruise in Nassau, 1,068 passengers and 918 crew members of the Adventure of the Seas flew directly into the Lynden Pindling International Airport in order to begin their cruise. Royal Caribbean is going to operate these cruises that commence in Nassau and end in Nassau for the next three months — through the middle of September — and will be joined by Crystal Cruises, which will start on July 4 and will operate for five months, through the beginning of November. (Tourism represents almost 50 per cent of the country’s GDP and 60 per cent of The Bahamas’ employment.)

“I want Bahamians at-large to think about the economic benefits that we all derived by that cruise starting here in Nassau,” Minister D’Aguilar said.

So, given Tourism’s importance in creating jobs and entrepreneurial opportunities for Bahamians up and down The Bahamas, I am so proud that my Team Tourism and I were able to pull off this Home Porting project. We quickly identified the opportunities that Home Porting offered to Bahamas Tourism. And, after countless hours of meetings and Zoom calls dealing with every aspect of home porting, it is truly historic that we were able to pull it off starting last Saturday!” Minister D’Aguilar said the arrival of the cruise ship/a cruise ship in Nassau Harbour generated “much excitement” for tourism officials, stakeholders, partners, local businesses and entrepreneurs after the 15-month absence.

“Everyone was excited when the (Adventure of the Seas), pulled into the Nassau Cruise Harbor after 15 months of there being no cruise ships at all.

Whatsapp and Facebook posts went viral when that ship pulled into the Prince George Dock. “We all see and know now, what the absence of cruise ships has meant for the economy of The Bahamas, especially Bay Street. It is painful to walk down Bay Street right now. Very few businesses open, and the absence of commercial activity in the heart of our country has been gut wrenching.

Minister D’Aguilar said the country’s reliance on Tourism is “huge” and that while there has been talk of diversifying the Bahamian economy for a long time so as to be less reliant on tourism: “The reality is that there ain’t nothing going to come close to replacing Tourism’s dominance in our economic landscape for the foreseeable future.”