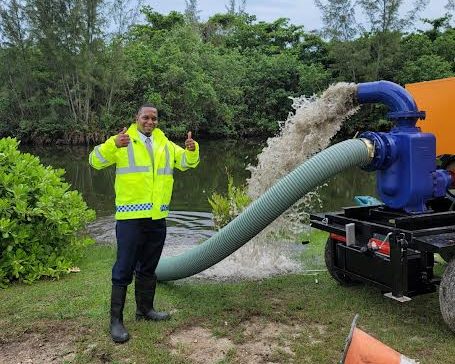 A pilot flood mitigation project will be launched in the Nassau Village constituency and once successful, it could spark nationwide relief efforts for the constant issue of flooding.

Member of Parliament for Nassau Village, Hon. Jamahl Strachan is teaming up with Katrina Johnson-Lightbourn of Flood Mitigation Services for the project, which he envisions will result in dramatic improvements for residents.

The process includes using an industrial pump that can move about 1,400 gallons of water per hour from a location. The pump consists of a dual filter inlet that allows for straining out large and medium-sized debris before the water reaches the holding tank. This will result in large amounts of rain water being removed safely and efficiently out of flood zones. Residents in these areas will be able to begin their clean up efforts more quickly; there is expected to be less damage to property due to quick flood water removal; and roads are expected to be easier to traverse after heavy rains.

“This is the first and only attempt, so far, to manage flooding at the constituency level with mobile emergency flood pumps,” said MP Strachan.

“It’s a public/ private partnership that brings a unified and synchronized approach to everyday challenges – and Nassau Village is setting the pace. We understand that as we go forward, the Bahamas – being a Small Island Developing State – is susceptible to climate change and sea level rise. We understand our vulnerability. Our Prime Minister Hon. Philip Davis has already made the clarion call – this was the response from one of our inner city communities. It shows that innovation can come from young leaders. We have done testing and possibly have a viable remedy to the flooding in the Nassau Village constituency.”

Once the pilot project proves successful, he said, the intent is to replicate it throughout New Providence and the Family Islands where it is needed.

A successful testing event was recently held at the pond near the ninth hole of the Blue Hills Sporting Fields Golf Course. MP Strachan was on hand to witness the machines in play first-hand. This was the controlled testing stage, according to Johnson-Lightbourn, who launched Flood Mitigation Services this January. She has been working with engineers to help perfect the machines, including her college colleague, Clayton Clarke. The next step is to engage in live testing in the Nassau Village constituency.

Johnson-Lightbourn has been busy in the community ever since she returned to The Bahamas in 2019 after living in the United States of America for many years. Among her efforts, she serves on the Board of the Cynthia “Mother” Pratt Foundation, and she has worked with Families Of All Murder victims (FOAM), which is headquartered in Nassau Village. She met MP Strachan at a community event and there, they struck up a conversation about hurricanes and flooding, and their effects on the residents of The Bahamas.

She said it was inspiring, speaking with MP Strachan, who was keen on supporting young professionals in innovation. He congratulated her on being the female owner of such an innovative company. He wants to see more young Bahamians come forward with solutions to everyday problems, helping to build a bright future for the country.

Once the project is successful, Johnson-Lightborn intends to find ways to make the water that is pumped out of the communities potable, so residents can use the water for gardening, washing and even drinking through reverse osmosis.