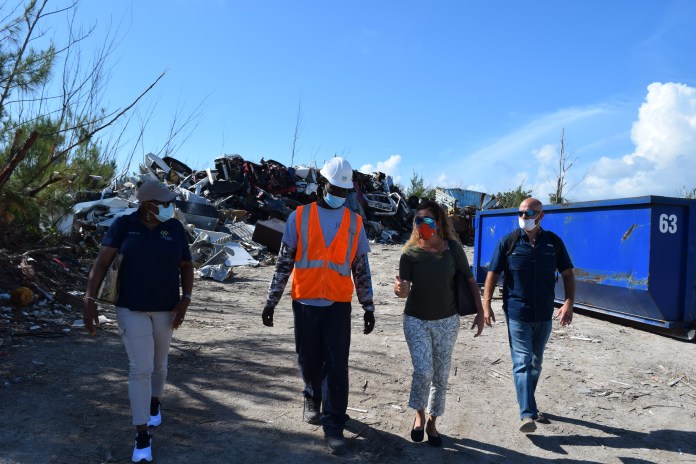 J&G Pavers’ primary goal is to construct a Modern Transfer Waste Station on Green Turtle Cay. For this venture, the Company will prioritize the use and rental of equipment already based in Abaco, hire Green Turtle Cay residents and always utilize all the Cay’s resources. The company also plans to introduce wood recycling, donate a new trash collection vehicle to their partners at the Dept. of Environmental Health, beautify the grounds surrounding their facility and maintain security. J&G Pavers began working on the project May 4th by mobilizing staff, equipment and the necessary resources to transport to Green Turtle Cay with the official project starting on May 10th.

The company’s Accelerated Project Approach initially revealed the community’s heightened concern about the waste site’s rodents, flies, pigs and other scavengers constantly ravaging the area in addition to its unsightly appearance. Workers semi-sorted the waste and utilized equipment to remove debris that spilled onto the road. The company also successfully launched a Non-Toxic Spraying Program comprised of All-Natural Neem, Citronella and Rosemary Oils and effectively reduced the number of flies at the site.

J&G Pavers erected a Temporary Barge Ramp and Piles to access the Cay whether the Ocean Tide was High or Low. This enabled transporting debris and garbage through the Cay without impacting operations at the nearby Green Turtle Cay Club. This option further provided for hauling and barging to take place for 12 to 14 hours a day that literally sped up the entire process. This move would usually take 8 to 9 weeks and was accomplished in just 2 weeks. To further expedite the project, the company used 4 to 6 Roll Off trucks – instead of the usual 2 – between Green Turtle Cay and Mainland Abaco and engaged triple the prescribed equipment and labourers. Now that the Site has returned to some sense of normalcy, hauling and debris removal will continue at the traditional pace over the next four weeks.

During that four-week period, the company’s priorities include:
1/ Create a temporary “Responsible Dumping” area for residents to allow Garbage Collection
trucks to throw trash into marked dumpsters according to the type of debris.
2/ Mark boundary points and confirm layout/points for transfer station pre-planning
3/ Progress Environmental approval for permanent dock access
4/ Provide a large bin to the Green Turtle Club.

Amazing, impressed and incredible were just some of the adjectives used by Green Turtle Cay Residents as they watched the transformation of the Waste Transfer Site. One resident said, “You could see the big change. The front looks good. There is now grass where grass never was seen before, there’s no smoke from the constant burning and I like how they are crushing it up in pieces rather than whole. The locals could see what’s going on and we appreciate that.”

Property Manager and Fire Department Volunteer Julie Farrington is also very pleased with the transformation. “Before this, it was really bad. The worst thing was seeing all the trash that kept blowing across the street and it was everywhere and very dangerous for vehicles. Right now, it looks so much better when you pass. It’s amazingly different and it looks really nice. The people there couldn’t be nicer. They even helped me wash my Golf Cart that I used to transport my trash. They’re really nice people.”

Principal/Teacher at the Amy Roberts Primary School, Sara Roberts reminisced, “Before Hurricane Dorian, the Waste site was operational, but not in the best stance. The difference at the site in the last few weeks has been incredible and hopefully that can continue.”

According to Pineapples Restaurant Owner and Life Long Green Turtle Cay Resident Sarah Sams, “Burning at the Dump was going on since I was a child. The trash smells and was burned weekly near a harbour, resorts and lots of homes that were not safe. Now, the new group is doing a good job and there seems to be an improvement. As a small nation, we need to find more smarter and sustainable ways to manage garbage in the future by getting guidance, ideas and financing ideas so we can be a nation that sets an example for change.”

Green Turtle Cay Foundation Board Member and Realtor Giselle McIntosh says she is very impressed with what the New Contractors accomplished in a short amount of time. “They’ve moved a lot of debris that was there and made it look very nice from the outside which is important since visitors pass the area. I hope the site continues to get cleaned up where it can be managed properly. The island is growing so quickly in terms of tourism, and it is now looking like it was Pre-Dorian and once they continue to remove waste from the island and not burn it like we were doing previously, the island will be an even better place.”

DRA Managing Director Katherine Smith recently viewed the project and is very satisfied with the work already completed. She said, “If J&G Pavers continues Phases One, Two and Three of this project, I think Green Turtle Cay Residents will be very satisfied with the work that has been put in to eliminate the island’s debris and municipal waste.” The DRA Executive added, “While there is a lot of work to be done, J&G Pavers has committed to working with the community to achieve their goal. This isn’t an easy fix as there is a lot of debris from Dorian and a lot of legacy waste that has been on the Cay for quite some time, so there’s still much more work to complete.”