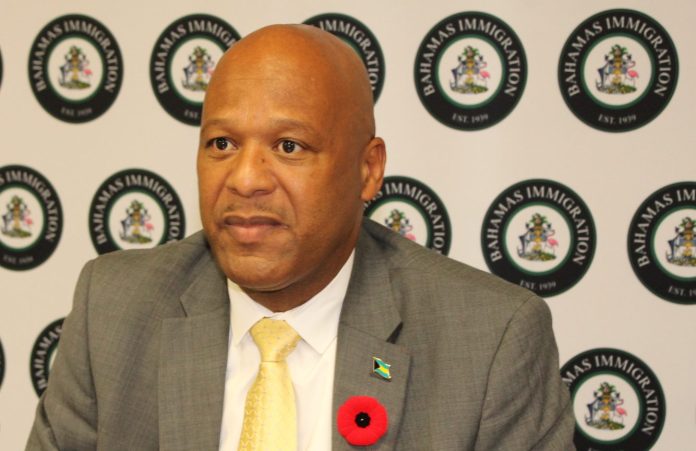 Minister of Labour and Immigration the Hon. Keith Bell (pictured) led a press conference at the Department of Immigration, October 28, 2021 at which it was stated Haitian nationals were arrested at Jaws Beach/Guana Cay on Wednesday night, October 27.  Officers of the department’s Enforcement and K-9 Units at approximately 9:15 p.m. responded to a call from the Royal Bahamas Defence Force Operations Unit and the Royal Bahamas Police Force Control Room for assistance in the area of Jaws Beach (near Lyford Cay).

Upon arrival, Immigration officials were notified of persons running into nearby bush.  From this location six Haitian migrants — three adult males, two adult females and one infant were taken into lawful custody.  An additional group of persons was observed on a boat that pulled away from the dock.  At 11:45 p.m. RBDF Operations reported that the HMBS Madeira intercepted the fleeing vessel in the area of Guana Cay, near Lyford Cay.  The group, later determined to be Haitian migrants, included twenty-one males, eleven females and five minor children.  The migrants were turned over to Immigration Officials at RBDF’s Coral Harbour Base at approximately 3:00 a.m. for further processing.