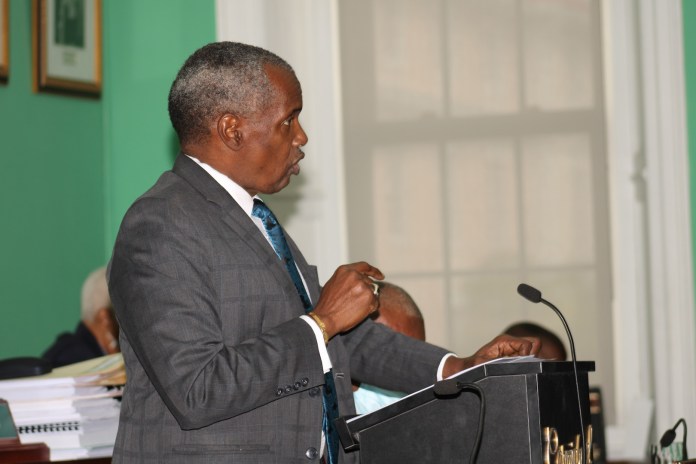 DPM and Min. of Public Works the Hon. Desmond Bannister is appealing to the Bahamian public to follow laws including health and immigration laws, and the building code. In a Communication to!Parliament Monday, April 12, Min. Bannister addressed recent operations conducted in the Abaco Shantytown and the second phase of the planned operation. “Over the past few decades, thousands of persons have deliberately occupied lands in this country that they do not own. In the process they have created shantytowns throughout the country in breach of the laws.

“Many of them have open holes for toilets;unlawful or no connection to the electric grid; pirated or no connections to water. The residences are not inspected, and do not meet building codes. Conditions are unsanitary; non compliant and unlawful businesses flourish; and stolen goods proliferate. “Several such communities have existed on the island of Abaco. Hurricane Dorian exposed some of the dangers of these unregulated communities when it wiped three of them out, the Mud, the Pea and Sandbanks. I vividly recall the horror that residents reported. I recall the devastation, and I will never forget the stench of decaying bodies. To this date, we still do not know exactly how many persons died in those shantytowns,” said Minister Bannister. He cited two orders issued by the Supreme Court– March 2018 and December 2018 that impacted both the Government and shantytown squatters.

“The position prior to hurricane Dorian was that the courts prohibited the Government from demolishing shantytown structures that had already been constructed and at the same time prohibited anyone from constructing, erecting or altering unregulated shanty town buildings anywhere in The Bahamas. The Government obeyed the court Order, as it is obliged to do; however, many of
these persons continued to unlawfully construct new buildings in shantytowns all over the country, and to enlarge existing buildings.”

Minister Bannister remarked that the legislation was enacted to protect everyone. He said the devastation in the Mudd as a result of Hurricane Dorian clearly demonstrates how persons can be injured and killed when structures are not built in accordance with the law.

He noted that 30 of the buildings survived Hurricane Dorian. Following its passage, the Government cleared all of the ruined buildings in the Mudd, Pea and Sandbanks and enclosed the areas. Residents responded by constructing unregulated buildings including a tract of land referred to as “The Farm.”

Minister Bannister outlined challenges in the shantytowns including: unsanitary and unhealthy practices which endanger health through the pollution of the water table with human feces, the proliferation of commercial sized generators, the sale of electricity, theft of electric wires from BPL, haphazard connections to provide electricity to the shanty houses, unregulated proliferation of services such as unlicensed shops and the sale of stolen goods. “Unfortunately, many of these breaches of the law are facilitated by Bahamians who also have benefitted financially by unlawfully providing services to unregulated communities. One such example at the Farm was the nightly provision of heavy equipment to construct roads, thereby enabling the construction of even more unregulated structures,” he said.

The Government responded by authorizing the Minister of Public Works to review the challenges associated with The Farm, and to co ordinate such actions required to ensure that the unlawful practices are stopped. Government agencies including the Royal Bahamas Police Force; the Royal Bahamas Defence Force; the Immigration Department; Bahamas Customs; Bahamas Power and Light; and private sector partners coordinated a multi phased plan, the first phase of which was executed on March 8th.

Accordingly, all illegally created access roads except for one were blocked with large boulders. Large signs in English and Creole that warn that structures that are erected contrary to the provisions of the Buildings Regulation Act or the Building Code will be demolished, and that persons who erect structures contrary to the provisions of the Planning and Subdivision Act will be subject to prosecution, and the buildings will be demolished.

The signs also warn that the Supreme Court has ordered that no action is to be taken to construct, erect or alter new structures. Moreover, the plan also includes the confiscation of commercial generators and the closure of illegal bars and commercial operations. The following notices were affixed to all of the structures that were erected prior to the passage of Hurricane Dorian.

Furthermore, after 28 days the third phase of the operation will begin with the demolition of the other structures in accordance with the provisions of the Building Regulations Act. He applauded the work of the government agencies involved for the thorough planning,expertise and the exceptional leadership that they displayed throughout the initial stage of the operation.