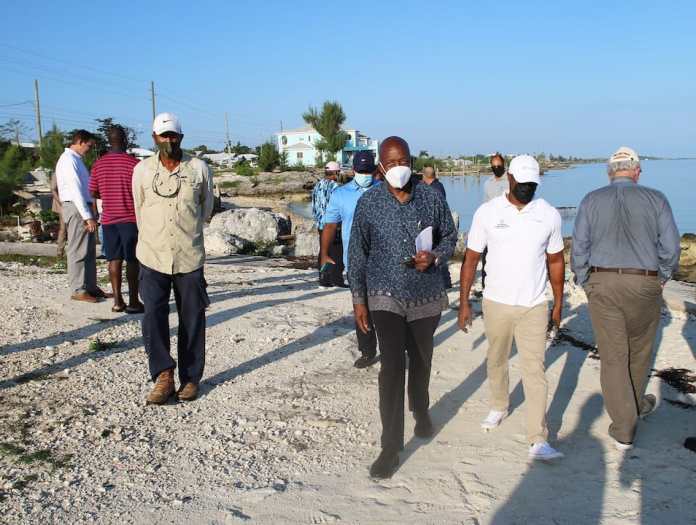 ABACO, The Bahamas – December 10, 2021 — Repairs to docks in Abaco, including Murphy Town and surrounding communities, are high on the infrastructure priority list for the Ministry of Works and Utilities.

“We have already in the Ministry of Works scopes prepared for some of those docks and will be giving those kinds of infrastructure priority because they are centres of economic activity, fishing, also for domestic tourists as well as foreign tourists who go to these places to experience the Bahamian culture,” said Works and Utilities Minister the Hon. Alfred Sears.

During a visit to Abaco and surrounding cays December 8-10, Minister Sears along with a technical team from the Ministry of Works and Utilities, including Director of Works Melanie Roach, inspected ramps, docks, sea walls, roads, Little Rock Bridge, Wilson City Power Station and public buildings (schools included). Minister Sears indicated that work such as the Little Abaco Bridge is already in progress.

“One of the contractors who had a delay, Bill Simmons Construction, will be resuming his road work within a matter of weeks. The road works we are viewing now we will be prioritizing and you will see contractors being mobilized very quickly not just on the mainland but the cays which we would have visited yesterday — Elbow Cay, Hope Town, Green Turtle Cay and Guana Cay. Works have been identified in all of those cays.”

He noted that Cabinet has made provision of funds for the installation of the infrastructure of a new subdivision in Spring City.

“The government is moving aggressively because these structures were not designed for long term habitation; they were intended to be short term. The government is looking forward to bring relief as quickly as possible.”

Minister Sears underscored the “magnificent” collaboration between the Bahamian community, stakeholders, second homeowners and NGOs in Abaco. Parliamentary Secretary John Pinder and MP for South/Central Abaco highlighted some of the challenges of residents who reside in the dome community.

“A lot of my people who still live in temporary domes have sewerage problems, electrical problems, mold problems which were not designated to be anything more than a very temporary situation which has turned into a long-term situation.

“We have 40-50 RV trailers with our government workers outside the government complexes. These are the challenges at hand that Abaconians face on a daily basis and why it’s hard to progress in a more expedited manner,” he said.

Mr. Pinder also acknowledged the contribution of NGOs and nonprofits with the local communities.

“Some of them started but we really need help to push forward infrastructure, water, electricity. These are things that are essential and things that we need to move Abaco beyond the recovery stage. We are resilient but even the most resilient need a little help sometimes,” he said.

Parliamentary Secretary Kirk Cornish and MP for North Abaco extended gratitude to the NGOs for their support.

“Words cannot say enough thanks because they came to our rescue in our most needed hour.”

He urged Abaconians to be patient and assured that the government is working on their behalf.