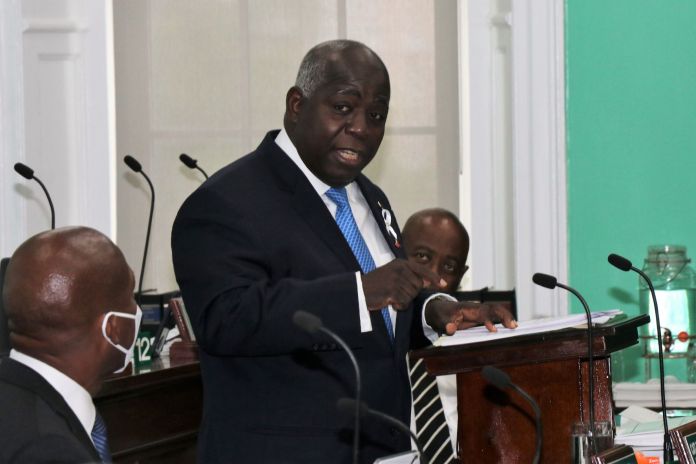 NASSAU, The Bahamas – Prime Minister and Minister of Finance the Hon. Philip Davis said in the House of Assembly, on November 29, 2021, that the capital expenditure budget has been reduced by $54,230,383; and that the agency with the biggest reduction was the Ministry of Health, with a net reduction of $14,000,000.

“What we have done is moved the $19 million allocated for the Rand Hospital in anticipation of major works taking place in the next fiscal year,” Prime Minister Davis said, during his remarks to commence debate on the Fiscal Year 2021/22 Supplementary Budget and Value Added Tax (Amendment) (No. 2) Bill, 2021.

“We have, in the short term, though, put in place $5 million dollars for hospital repairs and maintenance for this fiscal year,” he added.
Prime Minister Davis noted that his Government had also reduced the Ministry of Finance’s capital budget by $20,969,998.

“The highlights of this decrease include over $9,169,998 for IDB capital projects, $4,000,000 for the allocation for the development of the Prospect Ridge Subdivision, and $5,000,000 for Small Business Development,” he said.

Prime Minister Davis pointed out that the Minister of Transport and Housing had already put into the public domain the facts with respect to the Prospect Ridge Development, so there was no need to discuss that matter further, except at some point the member for Killarney and former Prime Minister Dr. Hubert Minnis would have to explain “how he came up with the price for these lots when there was no analysis done of the cost of the infrastructure”.

“Our initial review of the project revealed that the development would cost the Bahamian people approximately 15 million dollars, and the collective price of the lots do not cover the estimated cost of the infrastructure,” Prime Minister Davis said. “Perhaps Prospect Ridge was merely a distraction or a campaign ploy, without a real or sincere intention to see it through. It is difficult otherwise to understand the basic lack of analysis and cost projections.”

Prime Minister Davis stated that the Inter-American Development Bank was the country’s number one development partner. It was, therefore, disappointing to inherit a portfolio of IDB funded projects where the achievement of the developmental objectives were severely challenged without radical action, he added.

He said that that, in the case of both the Ministry of Works and the Ministry of Finance, budget allocations to support IDB funded activities had been reduced, as there was no likelihood that the expenditures could be incurred before the end of the fiscal year.

“The Supplementary Budget also reduces the amount of funding expected from the IDB this fiscal period,” Prime Minister Davis added.

He then noted that the reduction of the allocation for Small Business Development in the Ministry of Finance budget had been explained by the technical officers of the Ministry, but for clarity he wanted to restate the position.

“This administration is firmly committed to small business development,” Prime Minister Davis said. “I remind this House that the Bahamas Development Bank, the Venture Capital Fund, and the Small Business Development Centre (SBDC) were all established by PLP administrations; so that is our commitment and it stays there.”

Prime Minister Davis said that sustainable small business development requires a supportive environment; and the SBDC was designed to assist in providing just such an environment.

“During the pandemic, Bahamian ingenuity took hold at the SBDC and, through an army of private lenders, it was able to provide support to the small business community,” he said. “This Government is interested in seeing this model continue in a structured manner and, at the same time, not have the SBDC duplicate the Bahamas Development Bank’s efforts by engaging in direct lending.”

Prime Minister Davis noted that, on the revenue side, his Government had taken a “very conservative approach”. “We have adopted the existing revenue estimates for the remainder of the fiscal year and boosted them by only $92 million more than forecast,” he said. “The
$92 million simply recognizes the actual revenue above forecast that was recorded in the first quarter of the fiscal year.”

“We have made no adjustment for the ending of the emergency orders, the reestablishment of the revenue enhancement unit or the continuation of the vaccination programme,” he added. “I note, however, that all of these things are revenue positives.”

Prime Minister Davis said that his Government had taken that approach because it was cognizant of the fiscal risks that the country faces.
“The $1 billion difference in liabilities discovered upon taking office is perhaps the most visible risk; but it is not the only fiscal risk before us,” he said.

“We are awaiting the final report from a private sector accountant firm on this matter; but I think I should be clear on a few things,” Prime Minister Davis added. “The methodology used to derive this number is the same methodology which should have been used in the pre-election report, as specified in the Fiscal Responsibility Act.

“Hopefully, the accountant’s report will shed light on why this methodology was not used in the pre-election report.” Prime Minister Davis pointed out that the $1 billion figure contained liabilities that were known and immediately payable. “For example, there was the underfunding of pensions and gratuities for retired civil servants, which have now been incorporated into the Supplementary Budget,” he said.

“It also contains debt maturities for which no refinancing arrangements have been made as of the 30th of September 2021.”
“This would include the $246 million loan assumed by the Government on behalf of BPL and the $167 million Promissory Note issued by Resolve for the purchase of the distressed assets of the Bank of The Bahamas,” he added. “I can, at this time, say comfortably that refinancing arrangements for those obligations have now been put in place.”

“This is an important distinction which may have escaped some who have made simplistic and disingenuous public comments about the comparison of apples and oranges.”

Prime Minister said that he wished to give comfort and assurance to the Bahamian public that the team in the Ministry of Finance had already begun the process to address the nation’s unfunded liabilities, just as his Government had done in the past.

“This would include the creation of a sinking fund or funds to ensure that when obligations are due, we are able to pay them,” he said. “It is for this reason the public will not see a line item for $1 billion in the Supplementary Budget; but I wish to be clear that this administration does not intend to default on any of its obligations.”

“This administration will address its financial obligations in an orderly and timely manner,” Prime Minister Davis added. “We will not betray the trust of persons who have engaged in business with the Bahamian government in good faith.”

Prime Minister Davis also addressed “the talk in the public sphere” about the $2.1 million decrease in the Education budget. “The decrease was the result of the findings of an audit to remove all inactive persons from the payroll,” he said. “Other savings were identified due to the continuation of virtual learning, with certain expenses associated with in-person learning and thus not required for a portion of this school year.

“To be clear, the operations of the Ministry and Department of Education were not impacted by this removal of inactive people from payroll or the reduction in expenses due to virtual learning.”

“The Ministry of Youth, Sports, and Culture saw a $1.9 million dollar decrease in its budget that represented savings due to there being no Junkanoo parade this year,” Prime Minister Davis added.

“I want to make it clear to the people of The Bahamas, and especially the people impacted by recent storms: we have not cut the nation’s disaster response budget,” Prime Minister Davis said. “Instead, the now defunct ministry’s budget has been moved to the Office of the Prime Minister, where it can go towards the Bahamas Disaster Reconstruction Authority.

“As you can see, many of the so-called cuts that have been pointed out are simply instances in which the government has streamlined for efficiency or reallocated funds to achieve the same objective.”

Prime Minister Davis said that, in that budget cycle, there will be the launch of the Public Debt Advisory Committee to strengthen the nation’s debt strategy.

“We will see the re-establishment of a fully resourced Revenue Enhancement Unit with the goal of minimizing tax avoidance and fraud,” he said. “We will also see the formation of the Revenue Policy Committee, comprised of our brightest fiscal and economic minds, to develop reforms related to revenue collection and policy.

“Our fiscal goals remain unchanged,” he said. “As our term progresses, we will unveil further reforms to strengthen the country’s revenue model.”

For the record, Prime Minister Davis said, he noted that that debate on the Supplementary Budget will delay the tabling of the Fiscal Strategy Report.

“This report, which is mandated by the Fiscal Responsibility Act, will be tabled immediately after this debate and will provide the technical underpinning for our plan going forward,” he said. “However, the discussion of revenue options to achieve the 25% Revenue to GDP target that is set out in the Supplementary Budget will be deferred until the Mid-Year Budget presentation.”