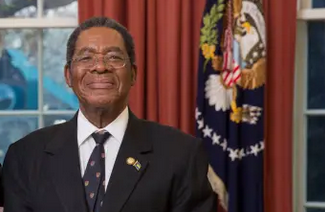 One of the pioneers of the progressive movement Dr Eugene Newry passed away last evening. Dr. Newry was a neurosurgeon, a writer and philodopher, a political activist and a diplomat.

In the early 1960s as the PLP’s leadership was passing to a new generation, Eugene Newry was a member of the National Committee for Positive Action (NCPA) which organization was responsible for engendering a more activist and aggressive posture for the PLP following the defeat of the party in 1962.

One of his fonder memories was engaging in a demonstration outside the Lyford Cay gates when then U S President John Kennedy officially visited The Bahamas in 1962. He said Mr Kennedy sent word to ask what the demonstration was about and ended up having lunch with a group of the young PLPs including Dr Newry.

He trained in France as a neurosurgeon. He returned to The Bahamas and practiced here at the public hospitals.

Upon retirement, he assisted the leadership of then PLP Leader Perry Christie in the return to political power. He served under Mr Christie as Ambassador to Haiti and Ambassador to Washington D C. I had the honour of working with him on both occasions as Minister.

He was an avid reader of history and an incisive commentator on the public affairs of the country up to his passing.

The PLP is deeply grateful for his life of service to the nation.

On behalf of our leader and Prime Minister Philip Davis and Mrs Davis, Deputy Chester Cooper and Mrs Cooper, all Cabinet Ministers, Senators and MPs, our officers and members, we say rest in peace.

Our condolences to his widow Francoise and his four children in particular my colleague at the Foreign Ministry Eugene Torchon Newry.