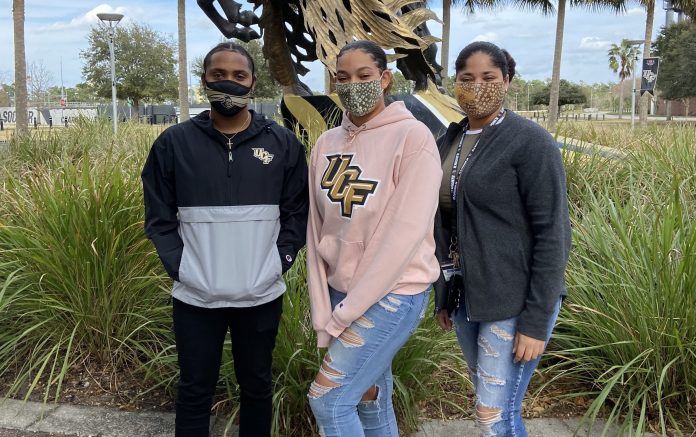 It’s the beginning of a brand-new chapter for three Grand Bahama students experiencing their first few days of a new school year at the University of Central Florida thanks to the generosity of the Lewis Foundation.  UCF’s Spring 2021 classes began Monday [January 11]. For many new students it will undoubtedly be a first year unlike any other.  The pandemic’s presence changed life at the Orlando campus. There are COVID-19 mitigation efforts in place along with a hybrid of in-person instruction and virtual classes. Still, that hasn’t dampened Jordan Thompson’s and sisters Haley and Jade Adderley’s enthusiasm for higher learning.

Thompson feels lucky to be counted among the 69,500-student body hailing from all 50 US states and 149 countries around the world.  “I took three years before I went off to college,” said the 22-year-old. “If I had stopped looking, I would not have found the Lewis Foundation.”   The 2016 graduate of Bishop Michael Eldon went straight into the workforce. The family’s saving had been all but depleted in the fight to keep a loved one alive.

“Attending university was always more of a distant dream of mine, especially after my dad fell ill with heart complications late in my 11th grade year and continued dealing with it throughout my entire 12th grade, two of the most crucial years of my high school life,” Thompson recalled.

“This led to less focus on my behalf along with the college funds my parents had saved up and any other personal savings all being used up in order to get my dad the medical attention and eventually the surgery he would need to save his life.”  For three years he worked as a photographer and videographer capturing destination weddings for a multimedia company in Freeport before Hurricane Dorian struck in September 2019, bringing the island’s tourism sector to a virtual standstill.

“I stopped working after that. To make some money, I spent my time working with some of the insurance adjustors that were down here. I also helped to clean up my house which flooded during the storm.”  Last year, he heard about the Lewis Foundation.  Each semester, the foundation awards four full scholarships covering tuition, textbooks, room and board. Preference is given to first generation college student who come from homes where neither parent attended university.

The scholarship is renewable up to eight semesters based on UCF’s good academic standing requirements. “Although preference is given to new high school graduates, the foundation considers non-traditional applicants on a case-by-case basis,” said Andrica Smith-Munroe, a spokeswoman for the Lewis Foundation.  A hospitality management major, Thompson hopes to one day own a five-star hotel in Grand Bahama.

“Many times, I wanted to give up and just say this college route isn’t for me. Not everyone is meant to go to college and I just thought I wasn’t one of those people with the odds just continually stacked against them,” he said. “Everyone’s journey is different. You have to never give up and stay resilient.” It’s a message the Adderley sisters know all too well.

Haley, a 2017 graduate of Bishop Michael Eldon,  spent a year at the University of Prince Edward Island in Canada studying to be a pharmacist before she realized a career in pharmaceutical was not for her.  “On the totally opposite end of the spectrum, my dream, my goal was to be an event planner,” said the 20-year-old.  In October, she stumbled upon the Lewis Foundation by way of a flyer dropped into a family group chat. Haley wasted no time applying to UCF.

“I remember getting that email saying that I got the scholarship and me and mommy just cried. It was just such a huge relief because we come from a single-parent home.”  She and her mother, Robyn, encouraged younger sister Jade to apply for the scholarship as well.   “We thought we used up all our luck when Haley applied. When I got it as well, it was a big shock,” said Jade, a 2019 graduate of Bishop Michael Eldon who intends to utilize her graphic design degree to help market Grand Bahama to tourists.

“Mommy was running around dancing. She was so happy, and I was in shock,” the 18-year-old recalled. “Stepping onto UCF’s campus felt like home.”  Receiving the scholarship to attend university has been life-changing for the family. “They were working so hard to maintain their grades. For them to see a prize at the end of the day, that reward you always hear about, the only thing we could say was, ‘Look at God’ because it came out of nowhere,” said the girls’ mother, Robyn Adderley.

“I blubbered like a baby when they both got accepted. It was such a huge relief. This means I can actually function now. Thanks to the scholarship I can breathe. I can’t fully express my level of gratitude to the Lewis Foundation.”  To be eligible for scholarships students must be a graduate of a Bahamian secondary school,  provide proof of acceptance into UCF and demonstrate financial need. Persons interested in applying for a Lewis Foundation scholarship should contact lewis.scholarship@tavistock.com.